Visualising the future of particle measurements with 3DPM 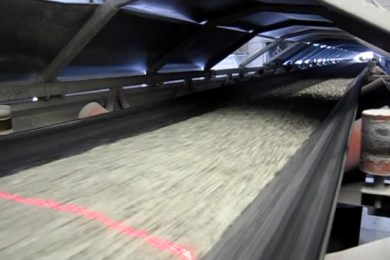 The 3DPM vision system has had quite a journey. Since the first prototype was installed at LKAB’s Malmberget iron ore to help the miner optimise its pellet production, the system has helped ‘settle the argument’ between mine and mill at base metal mines in Europe and improve the quality of coke being fed to blast furnaces in Japan.

The future looks bright too, with the potential for the system to play a major role in the automation of mine process plants.

Users of 3DPM have seen the importance of having a high-quality vision system that can measure material from a few millimetres to as big as 300 mm in size at relatively high speeds on conveyor belts.

Matthew Thurley, Principal Scientist at Innovative Machine Vision and one of the inventors of the system, has seen the system evolve at the same time as the industry’s understanding of orebody characterisation has grown.

Sweden-based MBV Systems was involved from the beginning on the system, working in partnership with Thurley during his time at Lulea University. It was a three-way collaboration between the university, the SME, and mining companies that got the product to market.

3DPM stands for three-dimensional particle measurement. The system consists of high-performance hardware for 3D scanning of particles and state-of-the-art software for analysis of the size and distribution of particles on a conveyor belt.

Back in 2006, the system installed at Malmberget was very different.

Thurley said the physical hardware, mounted above a conveyor, was pieced together to function properly, but required integration of many individual parts which was hard to maintain.

Still, it provided the iron ore miner with a detailed particle size distribution down to mm-size classes of its high-grade iron ore pellets.

And, in the 14 years since first installation, the principle of the system has remained: to provide increased knowledge of particle size distribution to generate value in, for instance, crusher/mill control, blast furnace effectiveness, process optimisation, or process knowledge.

As more companies have become familiar with the system, the advanced features such as algorithms to detect fines and partially embedded particles have come to the fore. The hardware has been reinforced for rough environments with IP65 rating and the need for very low maintenance even when running 24/7.

This has meant the system has potential in projects focused on improved quality control, automation and process control; three topics the industry is looking at to improve its bottom line, increase its revenues and remove people from operations.

LKAB started using the system more than 10 years ago. Over that timeframe, the system won many admirers.

Boliden is a big fan of 3DPM, with installations at its Garpenberg, Aitik and Tara operations.

Earlier this year, the miner decided to install another 3DPM system at Garpenberg, four years after the first system was delivered to the Aitik mine to help boost process knowledge and control strategies for crushers and grinding mills.

The way the Sweden-based miner has applied this technology makes for a great case study, according to Thurley.

At Tara, the system is being used for increased process knowledge – “settling the argument between mine and mill”, Thurley says – while, at Garpenberg, the vision system is being leveraged to detect boulders and rock bolts online in a safe way.

This shows 3DPM can be used for multiple purposes.

Such flexibility is down to the system’s ability to provide full size distribution measurements from 0-300 mm and the use of newer algorithms, with the accuracy dependent on the speed of the conveyor belt and the target size of the material under scrutiny.

One of the differentiating factors of 3DPM compared with other vision systems – many of which are now used within ore sorting projects – is the ability to provide a good 3D data profile of the surface of the rock mass. This helps distinguish between rocks and fines, for instance, even when the two are interwoven.

“With the system, we can classify fines and embedded rocks,” Thurley explained. “In other systems, fines may be mistaken for large ‘rocks’ and significantly skew the measured size distribution resulting in bad data and bad decision making.”

This is particularly important in operations that produce several products within one mine – for instance iron ore lump and fines – ensuring that the correct product ends up in the correct stockpile.

The vision system can be tailored to each application.

“At a pigment producer, for instance, we are looking for material that is 3 mm in size,” Thurley said. “In order to carry out that sort of classification, we use the latest technology to measure 3D points at 0.3 mm resolution.”

Typically, visualisation down to this size of material is not required in mining operations, where the company is really competing with batch ‘mine-to-mill’ ore characterisation studies carried out through sieving or some type of other manual process. Such classification can work well for that ‘sample’ but can be misrepresentative depending on the orebody’s heterogeneity.

“3DPM can, instead, provide an end-to-end analysis that can now start to be used as a decision-making tool,” Thurley said.

Analysis of the ore coming through just after blasting can help provide the reconciliation tool miners require to check how effective the blasting practice is, for instance, helping provide the “pre-crusher size distribution feedback much earlier in the value chain”, he said.

With the incorporation of new software and camera technology, the company is expecting more complex analysis to be carried out on bigger amounts of material, according to Thurley.

“These new technologies will allow us to analyse material on a conveyor belt going at 6 m/s where the previous generation was limited at around 2 m/s,” he said.

This could open opportunities at much bigger operations – some large copper or iron ore mines, for instance – as well as automated plants of the future.

It is not farfetched to see the system operating in the same blasting reconciliation position but providing crusher operators with the analysis required to optimise operations ahead of receiving the material.

Moving one step further, it could provide the same information to a system that operates autonomously.

“This could eventually lead to automatic control of the crusher,” Thurley said.