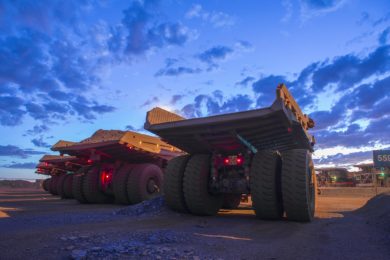 According to ICMM statistics, in 2018, haul trucks and other mobile equipment were involved in a third of mining industry fatalities. Through its risk assessment process, Anglo American’s Kumba Iron Ore identified reducing the risk of mobile equipment machinery incidents as a priority to enable the elimination of fatalities; therefore, it says it made sense to focus technological innovation on the application of collision-avoidance technology (CAS) in haul trucks. This journey began in 2014, when Kumba’s Sishen mine started developing an anti-collision system for the mine’s trackless mobile equipment.

In 2019, all the Sishen mine-owned haul trucks were fitted with the latest CAS. Sishen became the first mine in South Africa to deploy this technology in an opencast mine with a fleet of large haul trucks, each with a capacity of over 200 t (Komatsu 254 t 860E and 327 t 960E), and in an environment where traffic management and segregation form part of the mine’s critical controls. Anglo says Kumba’s success in rolling out CAS is due to the collaboration between Sishen, the truck manufacturer Komatsu, and Hexagon Mining, the leading proximity-detection system supplier. Together, they were able to adapt the technology to the models of haul trucks in use at Sishen. It includes Hexagon’s HxGN MineProtect Collision Avoidance System (CAS), but also incorporating its HxGN MineProtect Vehicle Intervention System (VIS), a Level 9 system that is capable of automatically recognising hazardous conditions and taking control of a vehicle when an operator fails to do so. If an imminent collision is detected, VIS cuts vehicle propulsion, applies the retarder, or activates the service brakes.

The technology has the following features: SpeedAssist and RampAssist, which prevent trucks from over-speeding in designated areas; AssetProtect, which disables reverse functionality when the crusher is in maintenance, and stops hoisting when the haul truck is under a powerline; and LaunchAssist, which prevents the vehicle from moving when a threat is detected in the travel path. Anglo American stated earlier this year: “The most impressive feature is BrakeAssist, which applies brakes to prevent imminent collisions or incidents with other CAS-fitted vehicles or infrastructure.Since the system was deployed, BrakeAssist has intervened in several incidents involving trucks at Sishen. Furthermore, as the reporting platform is being rolled out, its reports help management identify and address the causes of unsafe driving behaviour and improve traffic management.”

Kumba is now working on rolling out the collision-avoidance systems at its Kolomela mine fleet and to its contractor fleet in order to improve safety and ensure compliance with South African government regulations, which require mining operators to significantly reduce the risk associated with trackless mobile machinery. This requirement is also part of the ICMM Innovation for Cleaner Safer Vehicles Initiative. Up to now, solutions for increasing vehicle safety in mines have been rare. For Kumba, this has been part of a drive to achieve zero harm, aimed at making the workplace safer for employees. The company told IM that the Kolomela CAS project was slightly delayed due to COVID-19, however, it is looking to recommence installation in H2 2020, targeting H1 2021 for full implementation.