BMA commits A$2.3 million to research and innovation in central Queensland 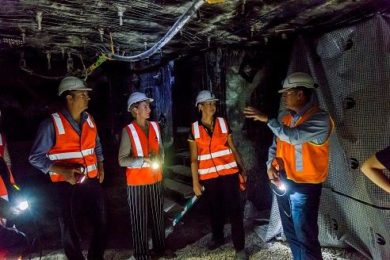 The newly established Resources Centre of Excellence (RCOE) in Mackay, Queensland, and CQ University have been given a boost with the announcement that BHP Mitsubishi Alliance (BMA) will provide A$2.3 million ($1.6 million) in funding towards research, training, and innovation at the two facilities.

The investment will support the appointment of a General Manager of the RCOE and a Chair of Automation and Future Work Skills at CQU, the company said.

The roles will play an important part in the future of the mining and METS sector in Queensland by helping to establish the RCOE as a world-class mining centre in Mackay and supporting CQU to deliver future-focused training and education, BMA said.

The RCOE features an underground coal mine simulator for testing, demonstrating and filming new equipment and products operating in confined spaces.

The latest announcement follows BMA’s initial commitment of A$475,000 last year to support the establishment of the RCOE, which is due to open in July.

BMA Asset President, James Palmer, said: “This investment will help the region continue to be a global player in skills and training, research, and innovation in the mining and METs sector.

“We want to see people currently in the industry or planning a career in the industry to have the best skills and training in the world and we want them to be proud and say it all started for them in regional Queensland.”

The RCOE GM and CQU Chair of Automation and Future Work Skills will work together with industry, community leaders and governments to identify the best way for the region to take advantage of the evolving opportunities technology will bring, according to BMA. A key component of which will be developing new models for innovation, skills, and training that will enable regional communities to grow their economies.

Chairman of the RCOE board, Tony Caruso, said: “The support of BMA and our collaboration with CQ University will enable the region to play an integral role in shaping the mines of the future.”

“The CQU Chair will play a critical role in producing and overseeing research that can be applied directly to the future sustainability of the resource sector and regional workforces, in central Queensland and beyond.”