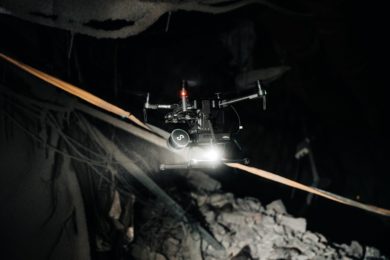 LKAB says it is using drones equipped with scanners to survey much of the area recently affected by seismic activity at its Kiruna iron ore mine in Sweden.

On May 18, a major tremor measuring 3.3 magnitude caused extensive and widespread damage to the mine. Since then, the company has been trying to secure the mine with rock technicians surveying the workings.

Per Brännman, Section Manager for sublevel caving at LKAB in Kiruna, said the use of drones and scanners for surveying was a safe and efficient way to work.

“No one carrying out inspection work will be exposed to any kind of risk,” he said.

Principally, the inspection involves surveying the damage to obtain a solid reliable data for decision-making with respect to, for example, rock reinforcement, LKAB says.

“The drone is a good tool, but the scanner is truly revolutionary. The drone is actually only the vehicle that carries the equipment,” Brännman said.

For this particular task, the company looked to Sweden-based AMKVO AB – which specialises in geodata and remote sensing – and its UAVs.

LKAB said, in terms of safety and technology, use of drones and scanners represent a major step forward. It is also a very effective means of investigating difficult-to-access areas, ore passes and areas affected by rock bursts.

“For example, we have been able to look at one of our loaders, which sits in an area that cannot yet be accessed physically,” added Brännman.

Drones and scanners can be made ready for deployment in barely 15 minutes. The technology is very precise, functioning well without detailed instructions from the pilot, according to LKAB.

Mirjana Boskovic, Seismology Specialist at LKAB in Kiruna, explained: “It works much the same way a bat navigates. The scanner helps us to form a wide picture of the area that is very useful in our work.”

Using sound waves, the drone finds its way around using “echolocation”. And, like a bat, a drone equipped with a scanner can navigate in its surroundings while avoiding obstacles with precision, LKAB said. This means that a scanner-equipped drone can fly into very confined, difficult-to-access damaged areas, which personnel cannot enter.

“There are many advantages with this type of technology, particularly in terms of safety,” Boskovic said. “When we inspect an area, we have to consider seismicity, the condition of rock and safety in an area. That’s the first step of our work. With this technology, we don’t even have to enter an area.”

Film sequences from the affected areas can be stored and used over the long term to discover changes in, for example, structures. The sequences can also be successively compiled to form a single, large model of the mine.

Boskovic added: “The rock bursts that we have discovered with the help of drones are to be expected after this type of event.”

Material from the drone flights is already being analysed, which means that the damage survey can be carried out more efficiently, safer and faster than before.

In just over a week since being deployed, much of the mine, from the Y15 to Y31 blocks, has been scanned, according to LKAB. The inspection area covers about 1.5 km and includes several levels and production blocks.

However, the company has not been possible to inspect block 22, the part of the mine that was the epicentre of the event.

Brännman said: “At this point, everything that we have been able to scan has been covered and, looking forward, we will be able to start scanning the ore passes.”

This means, in all, some 13 km of ore passes will be investigated in detail this summer.

“We have seen fantastic commitment and willingness to help on the part of so many people,” Brännman said. “About 15 people have been involved in conducting the flights and measurements.”

The scanner is here to stay and will be used for a range of purposes in the future, according to LKAB.

“This is a major step forward for safety in conjunction with inspection of affected areas of the mine,” it added.