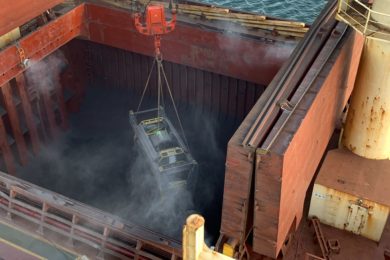 The pact will see OZ ship copper concentrate from its new Carrapateena mine from the port.

The port in Whyalla currently serves SIMEC’s haematite and magnetite iron ore mines as well as the Liberty steelmaking facilities in the same location (all part of the GFG Alliance). The facility handles both the loading of vessels with export-bound ore, as well as the inbound handling of raw materials, storage and blending of iron ore, according to SIMEC Mining.

“We’ve stated for some time that our port is open for business, and the last few years have demonstrated that through the number and variety of trials we’ve undertaken,” he said. This includes wind farm transport and the current ship deconstruction, scrapping and recycling project utilising the old shipyard slipway, the company explained.

Reed continued: “To take that to the next level and secure an ongoing contract is testament to our increased capability; and an exciting step in the evolution of the Whyalla Port.”

The contract will see secure containers of copper concentrate trucked from the mine – located about 165 km north of Port Augusta – to the Whyalla Port for consolidation. The concentrate will then be shipped out in 5,000-10,000 t cargoes, with annual shipments gradually increasing in conjunction with the ramp up of the mine.

In its March quarter report, OZ Minerals said Carrapateena was expected to produce 20,000-25,000 t of copper and 35,000-45,000 oz of gold in the 2020 financial year to the end of the June. It added that the plant ramp-up was ahead of schedule with a five-day continuous period at 12,000 t/d nameplate capacity achieved in March.

According to SIMEC Mining, strict environmental controls are in place including sprays to manage dust – with the state government and EPA consulted and engaged prior to providing the necessary approvals.

OZ Minerals’ Chief Financial Officer, Warrick Ranson, said: “We were really excited to hear that SIMEC had opened its port to third parties, and it has made a significant difference for us in reducing transport times.

“We are impressed with the capability SIMEC has managed to develop through the facility in recent years and look forward to partnering with them to deliver our product to market.”

While initially a three‐year contract, Reed is hopeful the agreement can be extended to reflect the overall life of the mine.

“This contract justifies our investment in the port – particularly the installation of our state‐of‐the‐art mobile harbour crane – as this wouldn’t have been possible with our old facilities,” he said.

“We will be able to transport this material safely, efficiently and with a high standard of environmental care; and expect our performance to lead to further long-term contracts in the near future.”