RUC Cementation ties in DaveyTronic detonators to underground mine network 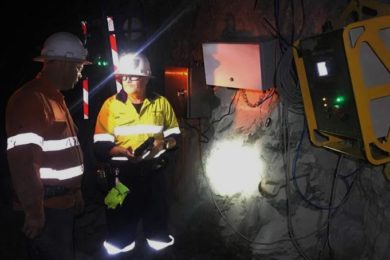 The contractor has implemented “Safety First Firing” with DaveyTronic to allow it to fire blasts over the established communication system at one of its contracted operations.

RUC said: “This will enable RUC to wire in development faces as they are charged, saving the run around at end of shift firing with wiring in conventional electric detonators and ensuring the integrity of the connection throughout the shift.”

RUC believes in the not too distant future it will be able to integrate the firing system, remote fan start-ups, and gas detection system to make the firing and re-entry of the mine as efficient as possible.

This is a first for Davey Bickford Enaex using the existing fibre-optic network to set-up a secure blasting system underground, RUC said.

RUC Project Manager, Dave Sheppard, said: “This is an exciting time with the implementation and operation of our digital projects. The remote gas detection system (Smart Gas monitoring solution) allows us to monitor air quality from surface and, in conjunction with surface-linked firing, allows us to save up to half an hour per shift with re-entries – effectively offering a 5% productivity improvement.”