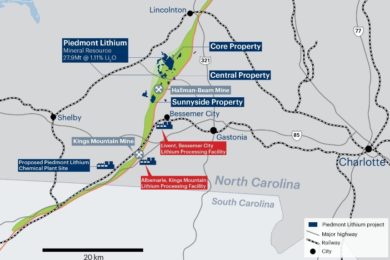 Piedmont Lithium has entered into a memorandum of understanding (MoU) with Primero Group that could see the Australia-based engineering firm deliver the planned spodumene concentrator at the Piedmont lithium project in North Carolina, USA.

Piedmont says it and Primero have partnered since early 2018, with Primero having been the lead engineering consultant for Piedmont’s scoping studies, concentrator design, and metallurgical test work management.

“Building on this strong relationship, Piedmont and Primero have entered into the MoU to work together on an exclusive basis to agree binding documentation relating to the definitive feasibility study (DFS), front-end engineering design, EPC (engineering procurement and construction) delivery, commissioning, ramp-up and contract operations of the spodumene concentrator,” Piedmont said.

Cameron Henry, Managing Director of Primero, commented: “Piedmont is a world-class project surrounded by infrastructure and ideally located near potential customers in the USA’s auto alley.

“We look forward to applying our specialist expertise in project implementation and operations to assist Piedmont in advancing the only spodumene project currently under development in the United States.”

Keith D Phillips, President and CEO of Piedmont, said the MoU represented a key milestone as the company builds out its project execution team, “with an emphasis on working with proven processes and experienced professionals”.

“The arrangements contemplated by the MoU create a delivery framework which significantly reduces technical, operational and commercial risks associated with the concentrator,” it added.

“The company continues to evaluate other strategic partnerships that could enhance performance in the design, construction and operations of other aspects of Piedmont’s integrated lithium hydroxide business.”

The prefeasibility study on the Piedmont lithium project, released earlier this year, envisaged two options – a “Merchant” project and an “Integrated” project. Both included an annual average lithium hydroxide production (steady-state) of 22,720 t, but only the latter included 160,000 t/y of 6% Li2O spodumene concentrate production over the 25-year mine life.