Centamin sets up Sukari for a solar power-fuelled future 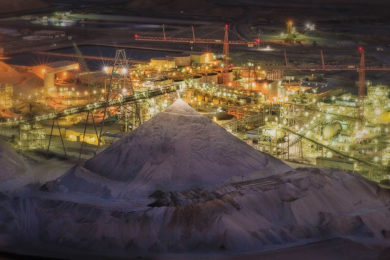 Among new projects featured in Centamin’s just-released 2019 sustainability report is the development of a solar power installation that could pump 30 MW AC of renewable energy into the mix at its Sukari gold operation in Egypt.

The Stage 1 30 MW solar plant is expected to replace 18–20 million litres of diesel consumption per year through operation during daylight hours, according to Ross Jerrard, Chief Financial Officer and Executive Director.

The bulk of Centamin’s greenhouse gas emissions result from the on-site power generation at Sukari, the company said in the report, with the site powered entirely by heavy fuel oil burning generators consuming over 90–100 million litres of diesel to meet the mine’s electricity needs. MAK and Wartsilla diesel-fired generators, with a combined power of 68 MW, are on site, according to the company.

In 2019, Centamin completed a preliminary study assessing the technical viability of integrating a solar plant at the Sukari mine. The results of the study demonstrated the potential of the project to materially reduce the consumption of fossil fuels and thereby reducing the company’s environmental footprint and operating expenditure, it said.

The study indicated a minimum of 36 MW DC/30 MW AC peak power hybrid solar plant would be the optimal capacity for an initial staged integration to the processing plant. A limited amount of battery storage (7.5 MW) is required to manage start up and shut down surges for integration into the existing site distribution and control systems, with the solar farm scoped over an 85 ha site on the Sukari tenement.

The project will be developed in two phases:

Centamin estimates up to 25% of Sukari’s power needs could be met through solar generation, with the initial 30 MW plant planned to be engineered with the ability to expand the power capacity in the future, if appropriate.

The construction spend for 30 MW is expected to be $37 million, with initial capital of $6 million committed at the end of 2019 to upgrade the high voltage reticulation on site and commence earth-clearing works in the first half of 2020.

Construction was scheduled to commence in 2020, however, as a precautionary move to protect the health and wellbeing of the workforce, non-essential 2020 capital expenditure was temporarily deferred, including the Sukari solar plant.

“This is in order to minimise contractors and other non-operating traffic on and off site, while restrictions related to COVID-19 remain in place,” the company said. Despite this, the company still plans to integrate solar power into the Centamin mine in 2021.

Centamin said it continued to work towards reducing emissions intensity and is in the process of establishing science-induced absolute emissions targets for medium- (2025) and long-term (2030) target years.

Other carbon reduction strategies being considered by the miner include transitioning on-site vehicles to electric vehicles and alternative truck buckets to improve hauling efficiency, it said.