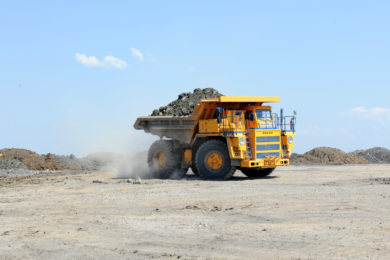 Up until now, the largest all battery powered mining dump truck to have been developed globally has been the 63 t payload eDumper from Switzerland-based eMining, which is based on the Komatsu HD605-7 truck model. While eMining is working on a larger 100 t model, this development is understood to still be at an early stage. Other hybrid trucks in development that will partially use battery power including the FCEV trucks from Anglo American (280 t) and Weichai (200 t) also utilise fuel cells with battery power.

Back to Belarus, BELAZ had previously said in 2018 it was working with an unnamed Canadian company on a battery electric truck but now the company has confirmed to IM that it is working on its own all-battery 90 t class truck based on its 7558 base model. This would be the world’s largest so far, and it would be fitting that it would come from BELAZ, which has a history of innovation in this truck class – it was the first to offer an electric drive 90 t 75581 truck back as long ago as 2013.

Moving to 2019, no less than five new models of the 7558 90 t series were manufactured. This includes the BELAZ-75588 with a gas-turbine engine that operates on LNG (plus the company already has several 136 t LNG trucks running), the BELAZ-7558С with an innovative valve-inductor drive, and the BELAZ-75589 with a diesel engine produced by Weichai. The number of options for different transmissions for the 7558 series has also increased, and two new dump trucks with AC traction electric drive from Russia’s “Sibelectroprivod” – the BELAZ-7558D – and from General Electric (Wabtec) – the BELAZ-7558F – have been put into operation. One more model of this payload capacity – the BELAZ 75584 – has already left the factory workshop in early 2020 with a new MTU engine.

The battery 90 t project truck will be known as the 7558E. IM can exclusively report that 15 lithium nickel manganese cobalt oxide (NMC) battery modules (total 765 kWh) for the truck have been manufactured in South Korea by Enertech International. They are understood to have been already shipped to Belarus for arrival in July 2020 with a plan for first movement of the new truck soon after as the basic design is already in place. The project has been slightly delayed due to logistical issues as a result of COVID-19. IM will closely monitor the development of the project and publish the updated specification as soon as it becomes officially available.

In tandem with this project, BELAZ has had trolley assist technology in-house for many years and the company plans to offer both an electric drive diesel trolley assist design and a hybrid trolley/battery truck; both of which are understood to be based on the 220 t 75306 model. IM can also reveal that BELAZ is also building its own 500 m trolley line in Zhodino for testing of these trolley models which is expected to be completed in the beginning of 2021.