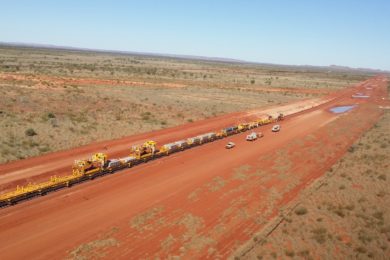 Australia-based infrastructure and rail company, John Holland, has secured a A$130 million ($90 million) contract with Fortescue Metals Group to construct 143 km of railway tracks and signalling at its Eliwana iron ore project in the Pilbara of Western Australia.

The track construction works will connect the new Eliwana Rail Line to the existing Fortescue Hamersley Line to Port Hedland, with the engagement seeing John Holland manage a newly upgraded rail welding facility in Port Hedland as well as the design, construct and integration of the signalling and train control systems.

The company will also procure and manufacture the signalling system wayside equipment from its Canning Vale fabrication warehouse and complete all civil and electrical installations of the wayside signalling systems on site, it said.

It currently employs more than 5,000 people across its construction, tunnelling, rail and building projects in Australia, and strengthened its rail, engineering and construction capacity after it acquired RCR O’Donnell Griffin’s rail business – saving 400 jobs in the process.

“It has been a goal of the WA rail team to bid for more integrated projects in the WA market and we are pleased to partner with Fortescue and play a significant part in a world-class iron ore project,” he said.

“John Holland is a major Australian employer and continues to honour its 70-year history of contribution to the local community.”

Once completed, the $1.275 billion Eliwana project, which also includes the building of a 30 Mt/y ore processing facility, will maintain Fortescue’s overall production rate of a minimum 170 Mt/y over 20 years, the company said.