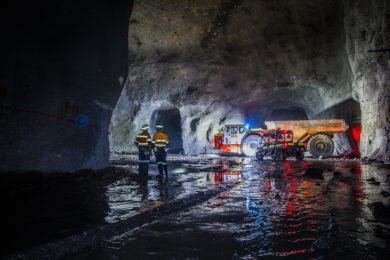 An updated feasibility study on the development of the underground mine at Oyu Tolgoi, in Mongolia, has confirmed that the huge copper-gold project will be delivering sustainable production later than initially planned and this output will come with a higher capital expenditure bill.

Majority owned by Rio Tinto through its 66% stake in Turquoise Hill Resources, Oyu Tolgoi is currently being mined as an open-pit operation (producing 146,346 t of copper and 241,840 oz of gold in 2019), yet previous studies have indicated a combined open-pit and underground operation could up the tally to around 500,000 t/y of copper.

Back in July 2019, Rio Tinto included an update on the underground project saying first output was expected to be achieved between May 2022 and June 2023, a delay of 16 to 30 months compared with the original feasibility study guidance in 2016, while preliminary estimates for development capital spend was $6.5-$7.2 billion, $1.2-$1.9 billion up on the $5.3 billion previously disclosed.

The updated feasibility study issued this week from Oyu Tolgoi LLC (owned 66% by Turquoise Hill and 34% by the Mongolian government), which is in the process of being submitting to the Government of Mongolia in accordance with Mongolian regulations and standards that require mining companies to submit updated feasibility studies every five years, includes a delay of 21 to 29 months for first sustainable production compared to the original feasibility study guidance in 2016 and an increase of $1.3-$1.8 billion from the original $5.3 billion development capital.

It also includes a new mine design for Panel 0 of the Hugo Dummett North underground mine at Oyu Tolgoi, as well as confirming that the caving method of mining remains valid.

Detailed study, design, engineering and optimisation work is ongoing to support the definitive estimate of Panel 0 for the development of this orebody, which remains due in the second half of 2020, Rio said.

These estimates are subject to any additional scheduling delays or increases in capital costs arising from the impacts of the ongoing COVID-19 pandemic, it added.

Back in July 2019, Rio said enhanced geotechnical and geological information obtained from drilling and mapping at depth suggested there may be some stability risks associated with the original mine design. This updated design was the result of a review of this information.

As a consequence of leaving the pillars in place, the material contained in the pillars has been reclassified from reserves to resources, Rio said, adding that part of the material contained in these pillars could be recoverable at a later stage following additional studies currently underway. This saw 2.43 Mt of copper, 570,000 oz of gold and 4.81 Moz of silver added to the July 3, 2020, Hugo Dummett North resource base.

Ore handling infrastructure will be relocated to the pillars, located immediately north and south of the current Panel 0 boundaries, Rio explained, with Panels 1 and 2 now be initiated as independent panels or mine blocks.

Optimisation of mine designs for Panels 1 and 2 is ongoing and it is anticipated that this next phase of study may result in further movements in classifications of reserves and resources, according to Rio.

Arnaud Soirat, Chief Executive of Copper & Diamonds, said: “This amended mine design is another positive step in the development of the underground mine which will unlock the most valuable part of Oyu Tolgoi. We remain focused on delivering the underground project safely and within the guidance ranges we have announced on both cost and schedule.”