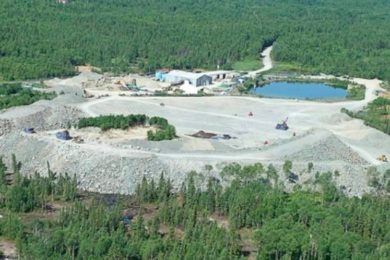 Granada Gold Mine has retained the services of Tetra Tech to begin a gap analysis to amend the company’s current Certificate of Authorisation for an on-site mill at its namesake project, in Quebec, Canada.

The engagement of Tetra Tech, a leading provider of consulting and engineering services, follows the discovery of at-surface mineralised structures with significant visible gold at Granada during a stage-one surface stripping program, Granada Gold President and CEO, Frank Basa, said.

“As such, the company has decided that the local mills for custom milling would not be able to process this mineralised material without a significant modification of the process flowsheet to recover this amount of visible gold,” he said.

This has led to the company pursuing the option of building an on-site mill at Granada.

The property includes the former Granada gold mine, which produced more than 50,000 oz of gold at 10 g/t in the 1930s before a fire destroyed the surface building, according to the company.

Some 120,000 m of drilling has been completed to date on the property, focused mainly on the extended LONG Bars zone which trends 2 km east-west over a potential 5.5 km mineralised structure. The highly prolific Cadillac Trend, the source of 50 Moz-plus of gold production in the past century, cuts right through the north part of the Granada property on a line running from Val-d’Or to Rouyn-Noranda, the company says.

Granada is in possession of all permits required to commence the initial mining phase known as the “Rolling Start”, which allows it to mine up to 550 t/d, capable of producing up to 675,000 t of ore over a three-year timeframe.