Volvo Autonomous Solutions on the next steps for its TARA battery electric, autonomous haulage offering 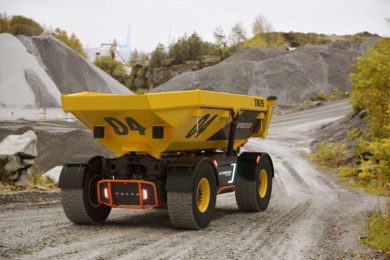 Following the forming of Volvo Autonomous Solutions in January of this year, IM Editorial Director Paul Moore caught up with President Nils Jaeger to get the latest on the new Business Area with a focus on the TARA transport solution, at the heart of which is the TA15 battery electric and autonomous hauler, the next commercialisation step in the concept that began with the Electric Site project and the HX02. Here is what he had to say.

IM: Where did Volvo Autonomous Solutions come from and why was it set up, plus what background do you bring to the President role?

NJ: Volvo Autonomous Solutions has been running since January 1, 2020 following the announcement last October that Volvo Group would establish a new Business Area focussing on autonomy. The reason for doing it is that we have been developing these technologies in a few different areas and sites within Volvo, so bringing it together makes for greater efficiency with work not being replicated in different locations. Of course, this unified approach also brings benefits in terms of R&D and innovation capabilities. Regarding my background, I began in the President role when the new division was set up – I am well grounded in the business case for new technology application as I was formerly President of Volvo Financial Services EMEA and before that VP International Finance for Deere & Company.

IM: Can you describe the concept of Volvo Autonomous Solutions’ TARA transport solution in more detail in terms of scope and the name itself? How does it relate to the Electric Site quarry project and the Brønnøy Kalk project?

NJ: The TARA transport solution is about selling transport as a service and represents the next level of development towards commercialisation of the prototype bidirectional, cabless, battery electric and autonomous hauler, the HX02. During the Electric Site project, we were trying to understand what kind of advantages such a concept could bring. TARA is not just the hauler itself, it consists of several components – the base vehicle (now called the TA15), plus required infrastructure such as charging stations, control tower, connected Cloud solutions, maintenance & repair support and the practical operations set-up which can be difficult as it will vary from customer to customer and from site to site. We can also help provide different financial solutions to help our customers on the path to using the latest technologies. The unified aspect of Volvo Autonomous Solutions means we can effectively tailor make a project design for each user as well.

TARA the name comes from a goddess of wisdom in Hinduism and the “mother of liberation” representing the virtues of success in work and achievements in Buddhism. It also means “star” in Sanskrit, symbolising the light of the soul. We felt some of this fitted with the innovative aspects of the project. It also as a name complements well our VERA project that covers our on-road cabless, battery electric and autonomous truck programme.

You also mentioned the Brønnøy Kalk project. As this involves Volvo FH onroad trucks with conventional diesel engines in a special quarry autonomous haulage application (5 km haul from mine to crusher), it is somewhere in between TARA and VERA so is being managed as an independent project within Volvo Autonomous Solutions.

IM: Will the hub be at the Eskilstuna site in Sweden and what is the latest with the new test track and other investments there?

NJ: You are right we have a new test track at Eskilstuna which is up and running, in fact we have six TA15 haulers and an R&D team working on the development of future automation functionality/capability as well as operating the current test fleet. We have also committed to invest further at that test track. The HQ of Volvo Autonomous Solutions is at the main Volvo HQ site in Gothenburg. And we also have other R&D locations within the new company including in Silicon Valley in California and Greensboro, North Carolina.

IM: Moving back to the TA15 itself, what is different from the HX02? Mining companies like Vale and Teck have publicly stated interest in the potential of smaller autonomous electric trucks. Are you talking to the mining industry about trials and/or larger tonnage versions?

NJ: The TA15 is now a near to commercial solution, while the HX02 was very much a concept vehicle. Of course, as is normal when moving on from prototypes, we have made some changes – mainly adaptations to the design and components based on our learnings so far to be able to industrialise the offering and its production in terms of scaling it to larger production volumes. There have also been some changes in the software platform. But fundamentally, the offering as a bidirectional, electric and autonomous load carrier – along with the main design elements – are unchanged and will not change.

For mining the upside is very much still the reduction in carbon emissions, energy costs and operator costs that were well proven at the Electric Site project at Skanska’s Vikan Kross site. We are in discussions with a number of mining companies, including those you mention, about the TA15 and also the potential to offer a trial or even a complete solution to them. Some of those discussions do involve consideration of other size classes and leveraging the platform further in that direction but these are at an early R&D stage. However, the TA15 can also be part of what we call a “swarm concept,” which means the mine can use many small machines in a very carefully coordinated way on the site rather than a small fleet of very large machines. Things are still being worked out with potential sites but it is likely we will have installations and implementation of operation of the TA15 at a mine by end 2021. This trial would potentially be like a segregated Electric Site project but within a larger mining complex site – and of course would come with all the necessary safety and practical elements, a lot of which would be worked out with the customer and would be slightly different for each mining site depending on terrain and current operations set-up.

IM: Did the trial at Harsco Environmental go ahead and what are the results so far?

NJ: Yes Harsco Environmental and Volvo Autonomous Solutions have a joint project at their location at the Ovako Steelworks in Hofors in Sweden, for adapted TA15 haulers being used as slag carriers during a year long pilot. We had agreed on a March 2020 start date, and despite everything met that target with four TA15 haulers going operational. However, with the evolving COVID-19 situation we had to pause the operation as the site had to close due to new regulations so the trucks only ran for a few weeks. However, we are in ongoing discussions with them as to when we might we might be able to restart the project. And the haulers performed very well in those weeks when they were running including in difficult weather conditions namely heavy snowfall.

IM: Is TARA from an overall solutions standpoint designed to be open & interoperable with other automonomous machines whether Volvo or other OEMs?

NJ: Of course interoperability is a key goal going forward but is also a challenge for us an all the the other players. The safety case and complexities vary between sites and different machines use different types of sensor technologies. These trials we are planning will still be in confined areas where there will be limited interaction with other machines – mainly other Volvo vehicles in the form of loaders and excavators – but over time obviously this functionality will be developed to allow the TA15 to interact with other types of mobile autonomous machines and manned machines. We will effectively be a system integrator so in terms of networks and other machines we want to be part of a wider “system of systems” but this also requires further progress in terms of standardisation not just from us but also others.