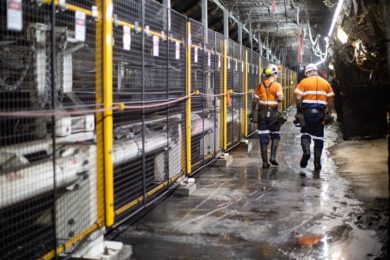 A trial of pressure sensors to remove power from the longwall face and the expedition of longwall automation are two of the areas Anglo American is hoping will improve safety at its underground coal mines in Australia, following a methane ignition incident that occurred at its Grosvenor mine, in Queensland, on May 6.

The company began to brief its Queensland-based workforce on the progress of its expert investigation into the methane ignition last week, with Tyler Mitchelson, CEO of Anglo American’s Metallurgical Coal business, saying the company’s focus continues to be on providing ongoing support for the five personnel injured during the incident, four of whom have now been released from hospital, while the fifth remains in a stable condition.

While investigations were progressing and may take some time to formally conclude, Mitchelson said the company would continue to review controls in place across its underground mines as any technical or other findings become available from the investigations.

“We know from our expert analysis that there was a significant and unusual overpressure event on May 6, where a large amount of methane was released into the longwall area, and, seconds later, a brief ignition occurred,” he said. “At this stage, the ignition source has not been conclusively determined and testing continues.

“We also know that in the hours leading up to the incident, there were no non-compliant methane readings in the longwall area.”

Since 2016, the company has invested around A$230 million ($161 million) on gas drainage and gas management activities at the Grosvenor Mine, according to Mitchelson.

“Despite this investment, and extensive controls in place to prevent an underground ignition of methane, we need to further improve our controls to respond to the specific combination of factors of an unusual and large overpressure event in the vicinity of the longwall with a potential ignition source,” he said.

“By drawing on technical learnings and information as it becomes available from the investigations, we have begun a review of our site methane management controls, which includes assessing additional technology options and applying any further improvements across our underground mines.”

As a first step, the company is beginning a pilot study at its Moranbah North mine to assess the use of pressure sensors to remove power from the longwall face as an additional control if a significant overpressure event occurs, he said.

“Whilst pressure sensors are already in use today, across the industry they have not been integrated for this particular purpose,” Mitchelson explained. “Learnings from the pilot will be incorporated across our underground mines and shared with industry.”

Mitchelson said the company has already invested “considerably” in progressing the automation of its longwall equipment, and “expediting this work will also be part of the solution to reducing risks in underground mining”.

Among more recent elements of longwall automation the company has pursued is the ability to operate its longwall shear from an above-ground remote operating centre at the Grosvenor mine.

The company added: “As the largest underground coal miner in Queensland, Anglo American has been at the forefront of technical innovation and has invested significantly in technology to improve safety in its mines, including additional methane detection equipment above and beyond regulatory requirements, digitisation to improve underground communication, and automation of equipment.

“We will continue to prioritise this work.”

Mitchelson said it was unacceptable five personnel were seriously injured on May 6 and that the company would ensure all relevant learnings from investigations underway and the Board of Inquiry are incorporated across its business.

“We continue to support our injured colleagues and their families as they continue their recovery,” he said.

He reiterated that safety comes first, and mining would not resume until it was safe to do so.

While mining activities have been suspended, the Grosvenor workforce has continued to be supported on full pay since the incident to enable the company to work through its future plans, step by step.