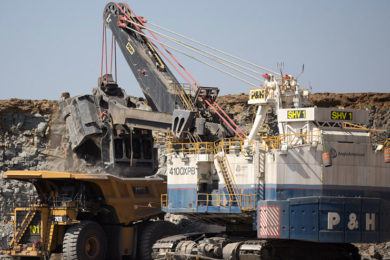 Anglo American has eyes on producing ‘green’ hydrogen to power the haul fleet at not only its Mogalakwena platinum group metals mine, in South Africa, but also at least one of its open-pit coal mines in Queensland, Australia, IM has learned.

The miner is part of the Macquarie Corporate Holdings Pty Limited shortlisted application for the next stage of the Australian Renewable Energy Agency’s (ARENA) A$70 million ($49 million) hydrogen funding round, a spokesperson confirmed.

BHP is also on this short list, all of which have been invited to submit a full application for ARENA’s funding for renewable hydrogen development projects in Australia.

While it is early days for the Anglo and Macquarie decarbonisation project, the spokesperson said the company’s approach in Queensland could be like the one the miner and ENGIE are developing at Mogalakwena.

The project in South Africa involves the delivery of a new Fuel Cell Electric Vehicle (FCEV), set to be the world’s largest hydrogen powered mine truck, and the ‘green’ hydrogen generation solutions to power it.

Nel Hydrogen Electrolyser AS, a subsidiary of Nel ASA, is to deliver a 3.5 MW electrolyser to ENGIE as part of the project, while Plug Power Inc is to build a first-of-its-kind full compression, storage, and dispensing system to service the new hydrogen-powered vehicle.

In Queensland, where there is no shortage of solar power to provide this ‘green’ hydrogen, Anglo has two open-pit coal mines – Dawson (pictured) and Capcoal – that could potentially benefit from this solution.

In response to the ARENA shortlisting announcement, Anglo American said: “Anglo American has pioneered the development of hydrogen power solutions for mining operations and we are working on a number of hydrogen projects around the world as part of our pathway to carbon-neutral operations by 2040.

“We welcome ARENA’s potential support and will continue to work on this particular project’s feasibility over the coming months.”

Applicants invited to the full application stage by ARENA will have until January 2021 to prepare their application, with the agency expecting to select the preferred projects by mid-2021. Successful projects are expected to reach financial close by late 2021 and commence construction in 2022.

All applicants may also be considered for financing from the Clean Energy Finance Corp (CEFC) under the CEFC’s A$300 million Advancing Hydrogen Fund.