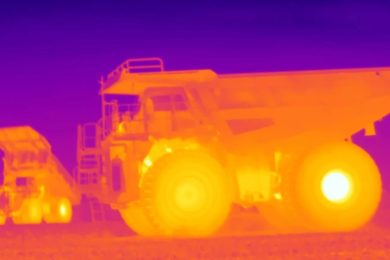 Pitcrew AI is a new system leveraging FLIR thermal imaging and AI technology to change the way trucking and mining vehicles are inspected. Using an AI algorithm trained on a library of thermal images, the system can spot problems in their early stages, before equipment is destroyed or vehicles cause deadly accidents on the road.

The system is built by Industrial Monitoring & Control (IMC), who developed the system to automate inspections of mining truck tyres. Mining haul trucks are no small investment – each truck tyre can cost as much as A$50,000 to replace, and if a tyre catches fire it may burn down the whole A$5 million vehicle. Worryingly, tyre fires are not an uncommon issue, and there have been multiple cases of entire trucks catching fire in Australia just in the last year. These numbers do not even factor in the enormous costs of mine downtime and lost production.

Tim Snell, Director at IMC, explains the need for a new and improved inspection system. “We’ve developed a whole bunch of different solutions over the years,” says Snell, “and this is one of those problems that has been known on large mining and quarry sites, but for many years there hasn’t been a good solution for it.”

The most common problem plaguing haul truck tyres is separation, a condition where the tyre tread delaminates from the casing. The problem is further exacerbated by the adoption of more autonomous haul trucks – separations can be caused by running over rocks, which drivers might avoid but which autonomous vehicles would run right over.

IMC had known for a while that separations could be detected with thermal imagers, and hand-held thermal cameras are commonly used at inspection bays. With a thermal camera, inspectors can detect hotspots caused by the separated materials of the tyre rubbing against each other and creating friction. Hotspots show up even if tyres are caked in mud – the usual case with mining trucks – whereas a visual inspection for delamination requires the tyre to be washed off in order to detect traces of a puncture in the top layer of the tyre. “It can be detected if you were doing a detailed visual inspection,” Snell says, “but in reality, getting the inspections done in real time without downtime, this is the only effective technology that I’m aware of.”

When it came to automating inspections, IMC decided to use a FLIR A615 Thermal Machine Vision camera and trained an AI model to identify the early stages of separation as they appeared in thermal.

While building up a training library was a monumental task – training an AI takes thousands of image – Snell and the rest of his team say they were surprised at how well the project came together. “I think the first time we ran the system live on a site we started getting alerts out of it straight away, it had actually done everything it was supposed to,” Snell says. “Nothing ever works that well straight out of the box.” Of course, behind that success was a decade of legacy coding work done by IMC, which has been distributing and integrating FLIR cameras like the A615 for about 10 years.

The underlying Pitcrew AI system was originally developed for roadgoing heavy vehicles, with a similar FLIR camera system already being used as a tool to automatically detect brake issues on cross-country trucks. This system provides authorities with compliance information and fleet operators with predictive maintenance data.

While tyres may be the frequent issue for mining haul trucks, brake issues are the problem that cross-country truckers usually run into. Autonomous thermal inspection systems at heavy-vehicle inspection stations and other stops along the road can alert road authorities to the early indications of brake failure and allow for targeted rather than random inspections. In Australia, brake failures on trucks are implicated as a contributing factor in nearly 40% of all truck accidents, making it a critical issue to address. The automated solution can be used to check hundreds of vehicles a day at a mining site or an offramp. “There’s no limitation,” Snell says. “You can process one every two seconds.”

Snell is hopeful that Pitcrew will become a widespread solution. “The idea is it will become a standard across Australia,” he says, and sees a global potential as well. Though the process of working with local road authorities to get the systems installed has been slow, over the past five years the company has made major progress. So far, they are operating out of Australia, Papua New Guinea, New Zealand, and even have systems installed as far away as South Africa. “There’s nothing that would hold us back from pushing to anywhere in the world I don’t think.”

Given the enormous financial and safety benefits, IMC believes the Pitcrew solution has a good chance of going global. The system currently uses either a FLIR A65 or FLIR A615 for this application.