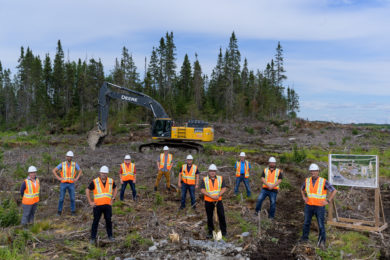 Sean Roosen, Chair and Chief Executive Officer of the company declared: “We are extremely pleased to see the advancement of the Partnership’s vision to explore and develop the underground resources on the Malartic Property. The geological endowment of this project continues to deliver for the partners and Osisko. We believe that Canadian Malartic Underground is well on the way to becoming another cornerstone asset for Osisko and we are keen to see the results of the aggressive exploration campaign on East Gouldie and the forthcoming development of the portal and ramp.”

These resources are distributed between several zones that occur directly beneath the existing pits and to the east and southeast including the East Malartic, Sladen, Sheehan, Odyssey North, Odyssey South, Odyssey Jupiter and East Gouldie zones. Osisko has a 5% royalty over the East Gouldie resources and either 3% or 5% on the remainder of the resources described herein. The resources occur between surface and a depth of over 1,900 m.

The Partnership has “now authorised the construction of surface infrastructure and an exploration ramp into Odyssey and East Malartic, with the purpose of eventually mining their respective upper zones and providing further exploration access to allow drilling in tighter spacing to continue studies to a greater detail. The new ramp will also provide the ability to carry out bulk sampling of up to 40,000 t of ore.”

The Partnership also announced that it has increased the exploration budget from C$25 million to C$30 million due to positive exploration drill results. The main focus of exploration during the second quarter was to provide support for an aggressive infill drill program at East Gouldie, with 10 diamond drill rigs operating to define and expand underground mineral resources.