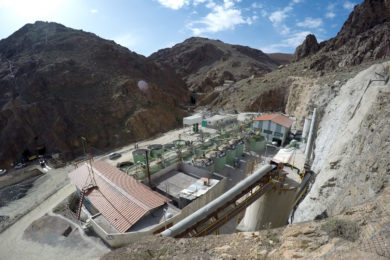 AYA Gold & Silver says it has launched the feasibility study for the expansion of its Zgounder silver mine in Morocco in partnership with Montreal-based DRA Met-Chem, a division of DRA Global.

AYA is also engaging several contractors with specific competencies related to the feasibility study, it said.

The Zgounder silver mine currently operates at around 500 t/d with nameplate capacity of 700 t/d. AYA believes the feasibility study will support a significant increase in tonnage, with a preliminary target of 2,000 t/d.

“This target will be further defined in the coming months and is consistent with internal resource growth assumptions,” it said.

DRA is recognised for its capabilities in mining and mineral processing and for its experienced engineering, technical and project management expertise, AYA said.

Benoit La Salle, President and CEO of AYA, said the strong silver fundamentals, as well as the company’s planned drilling exploration program, gave it confidence in growing the resource and the expansion potential of Zgounder.

“The feasibility study is an important step forward to maximise shareholder value,” he said. “We are assembling a highly qualified team of experts to complete the study by Q4 (December quarter) 2021.”

Daniel Gagnon, Senior Vice President at DRA Met-Chem, said the company was delighted to work with AYA and its team.

“We have historically worked in Morocco and look forward to leveraging our expertise in country and in precious metals to help optimise production and to deliver value to all stakeholders.”