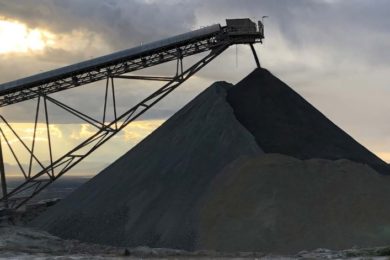 Hycroft Mining Holding Corp has continued to demonstrate the viability of its proprietary heap leach oxidation process at its Hycroft gold mine in Nevada, USA, over the June quarter, with the company hitting several milestones.

The Hycroft gold-silver mine was restarted in 2019 to demonstrate this process, which oxidises sulphides prior to leaching, on a commercial scale. Based on the success of initial operations and a 2019 feasibility study, Hycroft began implementing the long-term mine plan with the start of construction in April 2020 of the first phase of a large leach pad capable of processing the resource base with more than 30 years of mine life.

It also improved the solution management system to increase solution distribution to the leach pads, while commencing the leach pad expansion on the north side of the mine in anticipation of starting heap leach stacking in the December quarter of 2020, Hycroft said.

The expansion project will provide the company with the leach pad space required for future operations, the company added.

“With respect to the first phase, we expect the earthworks and leach pad construction to be completed in the fourth (December) quarter of 2020 and infrastructure completed and initially commissioned shortly thereafter.”

On the process side, the downstream process infrastructure is in place to ramp up operations. Hycroft is currently operating the Brimstone Merrill-Crowe facility and refinery, but it has begun planning to restart the 21,500 gallons/min (1,629 l/s) North Merrill-Crowe plant in 2021 to meet increasing solution flows from the new leach pad.

To facilitate these heap leach changes, the company expanded its mining fleet with the rental of seven 240 ton (218 t) trucks and one loader to increase mining capabilities over the quarter. It also improved its mobile equipment maintenance team to transition to self-performed maintenance and discontinue the contractor-led maintenance applied since start-up. Lastly, it began active in-pit drilling and blasting of fresh ore and reduced the mining of stockpiles.

On the crusher side, it refurbished and recommissioned the crushing system, which saw the average amount of material crushed go from 338,000 tons/mth (306,628 t/mth) in the March quarter to 459,000 tons/mth in the June quarter, an increase of 36%. It also established a comprehensive preventative maintenance program and initiated an ongoing operator training program to improve crusher efficiency and reduce downtime.

Steve Jones, Interim President and CEO of Hycroft Mining, said: “There have been a number of improvements at the mine recently that are building a strong foundation for the next phase of operations, including adding experienced technical people and increasing the reliability of process infrastructure.

“While the next few months are still considered to be transitional, we are looking forward to utilisation of the new leach pad and being able to ramp up to feasibility study operating levels.”