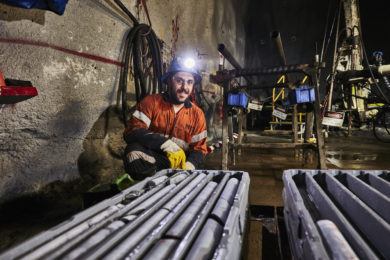 Swick Mining Services Limited has secured new drilling contracts with BHP’s Olympic Dam mine and MATSA’s copper operation in Spain at the same time as confirming the first commercial agreement for its Mineral Technology Business.

In what will be Swick’s second largest project, the company has been awarded a five-year contract to provide underground drilling services at Olympic Dam mine in South Australia.

Swick has been working with up to five rigs at Olympic Dam since 2017 when an initial trial of its underground mobile diamond drills commenced.

The new contract will see Swick increase its rig volume at site, with the first year’s scope requiring an initial eight rigs, with five to be added to the three currently operating at site. Of the five additional rigs, three are at site already and the remainder will be mobilised from Swick’s existing fleet, according to Swick.

Swick has also been awarded a five-year contract from Minas de Aguas Teñidas SAU (MATSA) at its copper operations in Spain, where two rigs are currently deployed.

These projects, combined with Swick’s existing work in hand, has expanded Swick’s order book to A$363 million ($260 million), it said.

Under the agreement with St Barbara Ltd, some 1,500 m of core will be scanned per month over a six-month period at the Gwalia mine in Leonora, Western Australia.

Swick will conduct technical assessment over a number of potential benefits of the detailed core analysis and high volume of quality data generated by the GeoCore X10 instrument, it said. The agreement has a value of around A$700,000 over the six-month period.

“Orexplore will be working with world-class subject matter experts to ensure maximum value for the client is derived from the data obtained to develop a compelling justification for ongoing services beyond the initial six-month period,” it said.

Swick expects a formal contract to be signed in the coming weeks and mobilisation of GeoCore X10 instruments housed in a custom-built mobile laboratory to site in September 2020.

The GeoCore X10 analyses the element concentrations and minerals contained in a drill core, as well as providing a visualisation of the rock’s internal structure in 3D. This speeds up the chemical laboratory analysis process, enabling miners to accelerate their own decision making.

Swick Managing Director, Kent Swick, said the company was delighted to be awarded a long-term contract with BHP at Olympic Dam.

“Credit goes to our operational team who have delivered outstanding safety performance, and high quality and productive drilling that enabled Swick to secure this long term, high volume work,” he said.

“In addition, securing a five-year agreement with a large copper miner MATSA, in Spain, adds to our ongoing work with Somincor in Portugal along the historic Iberian Pyrite Belt. Our local workforce in that region is highly skilled and they are to be commended for converting a trial into a long-term contract in Spain.”

He concluded: “In the Mineral Technology Business, it is very exciting that we have taken a significant step forward with the award of Orexplore’s first infield commercial agreement. We look forward to ensuring the value is extracted from this rich 3D data set and I am confident we can add significant long-term value to the Gwalia mine and the wider brownfield market.”