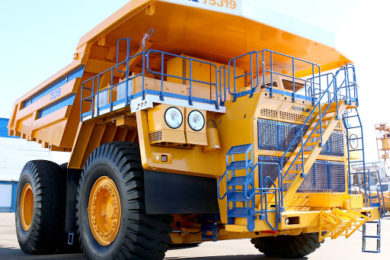 After awarding BELAZ a contract to supply 77 75137 130 t trucks for its Gevra mining complex last year, part of its South Eastern Coalfields Ltd (SECL) division, Coal India has followed this up with a new contract to the Belarussian firm for 96 7531 series dumpers of 240 t capacity. The INR 2,900 crore ($390 million) contract includes the cost of the dumpers and spares for eight years, including the one-year warranty period.

Coal India has made making massive investments in mining equipment of late, including with domestic OEM BEML from whom it ordered seven BH150E 150 ton (136 t) trucks and eight BH205E 205 ton (186 t) trucks for Gevra as well as Northern Coalfields Ltd’s Amlohri & Nigahi Projects earlier in 2020.

CIL wants to ramp up its production and productivity and buying larger capacity mining trucks that have greater availaibility than it existing ageing fleets is a step in that direction. The new contract is entirely funded internally.

The first batch of six trucks will arrive within eight months of signing of the contract. SECL’s total of 240 t trucks will now be 162, with 66 previously in operation. Some 84 of the 96 dumpers will be put into operation at Gevra and the remaining 12 in Kusmunda project in Chhattisgarh. Both are mega opencast projects of SECL. At Gevra alone there will be 116 240 t trucks along with the 32 already there while Kusmunda’s total will go up from 20 to 32.