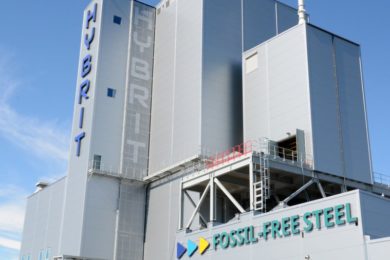 SSAB, LKAB and Vattenfall have celebrated the start-up of their HYBRIT pilot plant as part of a project to produce fossil-free sponge iron.

The achievement comes just over two years since ground was broken to mark the start of the pilot plant build for fossil-free sponge iron (direct reduced iron/hot briquetted iron) with financial support from the Swedish Energy Agency.

At the plant, HYBRIT will perform tests in several stages in the use of hydrogen in the direct reduction of iron ore. The hydrogen will be produced at the pilot plant by electrolysing water with fossil-free electricity. Tests will be carried out between 2020 and 2024, first using natural gas and then hydrogen to be able to compare production results.

The framework for HYBRIT also includes a full-scale effort to replace fossil oil with bio oil in one of LKAB’s existing pellet plants in Malmberget, Sweden, in a test period extending until 2021. Preparations are also under way to build a test hydrogen storage facility on LKAB’s land in Svartöberget in Luleå, near the pilot plant.

“With HYBRIT, SSAB, LKAB and Vattenfall aim to create a completely fossil-free value chain from the mine to finished steel and to introduce a completely new technology using fossil-free hydrogen instead of coal and coke to reduce the oxygen in iron ore,” they said. “This means the process will emit ordinary water instead of carbon dioxide.”