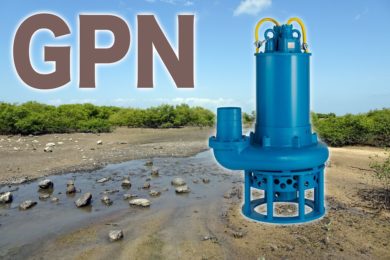 Tsurumi has released a new heavy-duty slurry pump that, it says, almost doubles the output of its predecessor pumps.

“However, ‘water’ can hardly be taken literally: declared as a “heavy sand pump”, the GPN 837 is intended for use wherever considerable amounts of solid matter are involved,” the company says.

This includes gravel pits or where sand, sludge, slurry and preferably also bentonite are involved. Mining is also a target market.

With these applications in mind, the engineers designed the pump with a solid construction. At 150 litres/s, hard rock up to 30 mm in size can pass through the pump with ease. Also, the agitator at the suction opening mixes mud and water so that the solution becomes more fluid.

The pump comes with a dry weight of 815 kg, a height of roughly one meter, is driven by an electric motor with 37 kW (400 V) and can pump vertically up to 24 m. When submerged, it is pressure-resistant to a depth of 30 m, the company says.

The water is diverted in a spiral around the pump – a design to counter the high abrasive effect of the pumped medium – while the impeller and suction plate is made of chrome cast iron, the housing of grey cast iron GG 20. For critical elements such as the double inside mechanical seal, the manufacturer uses silicon carbide. Tsurumi´s oil lifter, which lubricates the pump shaft in any position reliably by centrifugal force, is also a feature.