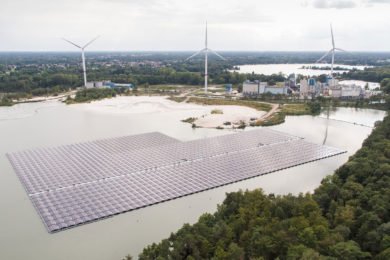 On Tuesday 8 September 2020, Flemish Minister of Energy Zuhal Demir installed the last solar panel of Floating PV, a groundbreaking solar park built on water and the first of its kind in Flanders. The innovative park was built on Sibelco’s ‘Schansheide’ silica sand mine on the border of the Antwerp municipalities of Mol and Dessel in Belgium.

The installation consists of 17,250 solar panels and will produce 7 Gigawatt hours (GWh) per year. This amount of electricity corresponds to the annual consumption of 2,000 households. Sibelco will use the maximum amount of electricity at its local operations to produce a high-quality silica sand. The Limburg Investment Company LRM, Group Machiels, Luminus and Sibelco are the initiators of this innovative project through partnership company Floating PV NV. ENGIE Solutions – Solar Technics, built the project on behalf of Floating PV.

The partnership between Sibelco, the Limburg investment company LRM, Luminus and Group Machiels started developing the project in 2017. “Sibelco owns many large quarries thanks to its sand extraction activities,” says Bart Van Herck, Operations & Country Manager of Sibelco in Belgium. “The ‘Schansheide’ quarry, for example, covers 70 hectares. Its location close to our operations makes the site perfectly suitable for a floating solar park. In 2017, we came together with our partners to design the project. The floating solar farm and our existing wind farm will provide renewable energy for 55% of the electricity needs of the operations in Dessel. The installation is further proof of our commitment to generating environmental value and making progress towards our 2025 sustainability targets.”

Floating PV is positive about the progress of the works. Construction started in March 2020 and has not been delayed despite the challenges of COVID-19. All technical connections will be completed later this month and the plant will produce its first green electricity in October 2020, exactly as planned.

“The floating solar park produces 7 GWh of green electricity annually,” says Flemish Energy Minister Zuhal Demir. “The fact that the installation will be operational in 2020 is a boost to the Flemish renewable energy targets. Finally, the solar panels are conveniently located. No new space is taken up and 80% of the electricity is consumed locally by the Sibelco plant. The Flemish Government wants to give full support to such projects. Floating PV will also carry out measurements and share its results with the Flemish Energy Agency.”

“Initiatives such as these help the province to achieve its climate neutrality objectives,” adds Cathy Berx, Governor of Antwerp. “This floating solar park makes optimal and multifunctional use of the possibilities that ponds like this offer for nature, but also for the generation of renewable and sustainable energy. Its added value and importance cannot be overestimated.”