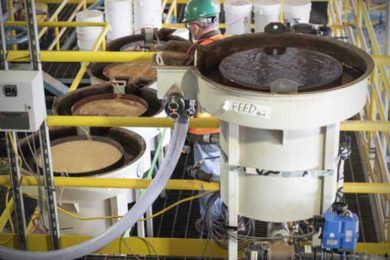 Sixth Wave Innovations Inc and Rio2 Ltd have executed a non-binding Letter of Intent for the trialling of Sixth Wave’s patented IXOS® purification polymer at the Fenix gold project in Chile.

Under the terms of the LOI, Rio2 will send representative ore samples from its Fenix project to Sixth Wave for testing and analysis in its Salt Lake City, Utah, facility. Sixth Wave will perform a combination of leaching and recovery tests using its IXOS technology on these samples consistent with protocols for the expected heap leach mining activity planned for Fenix.

Upon completion of the testing, to be performed in October, and pending positive results, the two companies will work to negotiate a definitive agreement to proceed to a complete on-site pilot adsorption/desorption/recovery (ADR) plant scaled to operate on a 400 t pilot leach pad.

IXOS, meanwhile, has been demonstrated to capture up to 99% of gold from cyanide leach solutions in laboratory and mine site testing where the data was analysed by the mine operator, representing a material increase relative to activated carbon, which recovers between 85% and 95% of the gold, as reported by potential mining customers of IXOS. Additionally, the increased selectivity of IXOS results in the capture of fewer other competitive base metals, Sixth Wave says.

Testing at multiple mine sites has shown more than 90% gold purity captured on IXOS, as opposed to 40%-70% for those generated by activated carbon, resulting in efficiencies in the refining process used to generate higher purities of gold.

The objective of this work, from Rio2’s perspective, is to determine whether Sixth Wave’s IXOS technology can be successfully applied to enhance the extraction of gold from Fenix gold ore by using molecularly imprinted polymers rather than traditional carbon for the gold adsorption process.

If successful, the application of IXOS is expected to result in a reduction of capital expenditure and operating expenditure related to the gold extraction process.

Upon successful completion and positive results of the pilot program, the companies would then move to an implementation phase incorporating IXOS into the actual processing plant to be constructed at Fenix.

Dr Jon Gluckman, President and CEO of Sixth Wave Innovations Inc, said: “We are very excited about this project and working with Rio2. The IXOS process should excel in comparison to traditional activated carbon because of the high rejection of base metal and scaling and the smaller process plant required for IXOS. Substantially lower power consumption in the desorption and recovery stages, and no need for regeneration, will also play a large role in reduced opex.”

He added: “It is exciting to be involved with Rio2 at this phase of the Fenix gold project as it allows us the ability to optimise the design of the ADR circuit without having to worry about retrofit constraints.”

Alex Black, President and CEO of Rio2, said: “Rio2 is always looking to embrace and trial new technology with the objective of bringing enhanced value to our stakeholders through the reduced capex/opex opportunities that innovative technologies can bring.

“The Fenix gold project is currently the largest undeveloped gold heap leach project in the Americas and we look forward to working alongside Sixth Wave during the development phase of the project.”