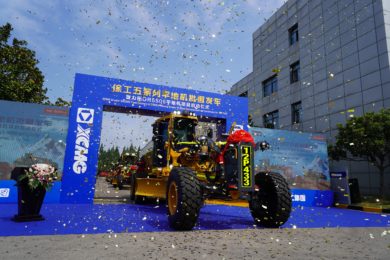 XCMG said the GR2605 grader model customised by Rio Tinto is an important symbol of China’s equipment manufacturing industry moving towards the global middle and high end markets. “XCMG will further deepen the cooperation with Rio Tinto. Through innovation-driven and excellent quality management, XCMG will build the GR5505 customised grader of Rio Tinto Group with high quality, so as to fully meet the requirements of Rio Tinto Group.”

Courts said in his speech: “The success of GR2605 grader customisation project is the result of the cooperation of both parties and is a great achievement. Thanks to the successful cooperation experience of this project, Rio Tinto firmly believes that XCMG has the strength to produce the most advanced super-horsepower grader in the world.”

Lu Chuan, President of XCMG: “The XCMG mining grader project is the result of the joint efforts of Rio Tinto team, supplier team and every XCMG employee involved in the project. Internationalisation is a major strategy of XCMG. Rio Tinto Group is a global well-known mining group. As the No 1 construction machinery and mining machinery manufacturer in China and No 4 in the world, XCMG has always valued the cooperation with Rio Tinto Group.”