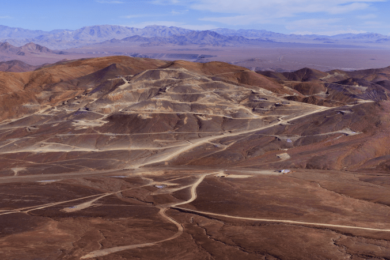 Capstone Mining’s 70%-owned subsidiary Minera Santo Domingo (MSD) has entered into an agreement that could see it slash some $400 million off the capital cost for building its Santo Domingo copper-iron-gold project, in Chile’s Region III, by offloading the port and concentrate transport infrastructure development to another company.

The Memorandum of Understanding (MoU) with Puerto Abierto SA (PASA), a wholly owned subsidiary of Puerto Ventanas SA (also a subsidiary of Sigdo Koppers SA) will see both MSD and PASA, over a 90-day period, explore mutual synergies and regional benefits for the proposed port component of the Santo Domingo project, Puerto Santo Domingo.

The port, which is fully permitted and located 100 km from the Santo Domingo project site, will be one of only two capesize vessel ports in the region, making it an attractive site for bulk shipments and a key asset allowing for broad resource development in Region III, Capstone says.

As part of the MoU, MSD will allow PASA to study, at its own cost, the project engineering and conduct a market study over the 90-day period.

PASA is looking to potentially acquire, construct, operate and maintain the deep-water port, including financing its development, Capstone said. Once in operation, Santo Domingo will receive preferred service as its volumes will represent  a baseload of business for the port.

The MOU also gives PASA 90 days to evaluate the replacement of the 110 km magnetite concentrate pipeline with a railway as part of its rail business, Ferrocarril del Pacifico SA.

The project infrastructure under consideration in this MoU represents some $400 million of the capital expenditure identified in the most recent technical report, Capstone says, and includes:

“Over the past three months we have seen a surge in interest in our fully permitted Santo Domingo project,” Darren Pylot, President and CEO of Capstone, said. “I believe this relationship with Puerto Ventanas will serve as a major catalyst for our Santo Domingo project. Our path forward includes successful culmination of the strategic sales process, executing a gold stream agreement and arranging project debt financing.”