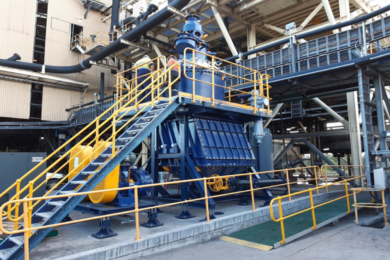 IM Editorial Director Paul Moore recently spoke to FLSmidth’s Lance Christodoulou, Global Product Manager – Flotation, about the revolutionary REFLUX™ Flotation Cell (RFC™) which is being developed together with the University of Newcastle & brings a unique design that is capable of achieving higher grades, recoveries and throughputs than any other flotation cell currently available.

Development of the all new REFLUX Flotation Cell (RFC) has been an extension of the already established development partnership with the University of Newcastle, working closely with Professor Kevin Galvin, who is Director ARC Centre of Excellence for Enabling Eco-Efficient Beneficiation of Minerals. This partnership has already seen the successful development and commercialisation of the REFLUX Classifier (RC™) with a similar commercialisation path being envisioned for the new REFLUX Flotation Cell.

Christodoulou says there is already an expansive database of supporting pilot-scale data and the company is working with clients to investigate suitability of the implementation of the technology into their flowsheets. These efforts can typically start off with lab scale testing with their ore followed by on-site pilot testing ultimately leading, in principle, to full scale installation. The lab scale work is possible either at the University of Newcastle or at FLSmidth in Salt Lake City. “If that testing goes well then we would recommend onsite trials with our containerised pilot system which receives diverted continuous feed from the main process route. We have a number of these pilot units, which are available for on-site testing and can be shipped to test sites globally. We already have a fairly well-developed set of models that will help predict how the RFC will fit into a flotation circuit in design and scale terms. We have existing data sufficient for high level technical studies such as feasibility work.” 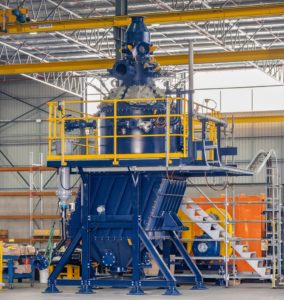 The RFC joins the wider suite of REFLUX technologies along with the REFLUX Classifier, which is a hydraulic classifier that separates particles using gravity, based on a difference in density or particle size. It combines a conventional fluidised bed separator with a set of parallel inclined plates that form lamella channels, and this lamella technology is what is implemented in the RFC. That said, the REFLUX Flotation Cell utilises flotation principles instead of gravity principles as with the RC™.

Christodoulou told IM: “You are essentially dealing with a form of staged flotation in that we take the feed and it makes contact with air in an environment where there is high energy density and high shear rates, effectively increasing the probability of collision and attachment to promote the kinetics of the system. The whole system we believe is unique in its design and mechanics. Once you have the contact occurring with the feed and air supply, this bubbly mixture is then passed down into a chamber which operates at a very high air fraction, much higher than anything currently available in the market and approaching what we would call flooding conditions.”

He adds: “We control the operation of the equipment with a positive bias flow – which means a generally downward volumetric flow of material but because you are operating in these conditions, you start dragging this bubbly mixture down into the bottom of the device. In traditional open top flotation cells, this mixture would simply be pulled out of the bottom of the cell. With the RFC the lamella plates come into play – which, due to the Boycott effect, allows this bubbly mixture to segregate very efficiently, preventing any loss of air bubbles to underflow. This enhanced segregation capability allows us to operate at a very high air fraction and control what is coming out of the overflow in terms of volumetric flow rate – it allows us to control the bias of the system. Then, with the application of wash water, we are able to displace any material that is coming up in the remaining water present in the bubbly mixture to maximise control of the grade so we can achieve a very high quality product coming out of the overflow.”

FLSmidth says it has seen a good technology transfer of the RC in terms of the lamella plates, which enhances segregation, to implementation in flotation in the form of the RFC. In the RC the lamella plates allow for much higher separation efficiencies, effectively producing a much steeper partition curve when considering density and sizing applications. In the RFC having this allows for advanced bubble slurry segregation, allowing the RFC to operate in higher air fractions with higher air flux and higher throughput.

“You have improved kinetics, improved grade and improved recovery all at the same time. In a normal flotation cell as you increase the gas flux, you start entering an operating condition where you lose the interface so there is no discernible difference between the pulp and the froth – so called flooded conditions. For example if you run a conventional cell  at the same gas fractions as we run the RFC, you start operating at flooded conditions which results in bubbles and pulp that contains valuable mineral being discharged out of the tails, so you aren’t effecting a very good separation or separation efficiency. In most open cell systems, you have an upper limit in terms of the bubble surface area flux that you can realistically operate at, even if you increase the gas flux or reduce the bubble diameter. The RFC lamella plates allow you to achieve the segregation and therefore operate with a smaller bubble diameter as well as higher superficial bubble surface area flux which then allows for better recoveries.”

The chamber operates at extremely high gas flux so is a really high air fraction environment. “We have enclosed the system and apply fluidisation wash water which allows us to control the underflow and overflow; and that allows us to operate with very high wash water fluxes and very high gas fluxes, pushing us out into operating ranges that are not possible in open cell systems, when considering air and wash water fluxes, achieving simultaneously higher grade and higher recovery – shifting the grade recovery curve along with increasing the throughput of the equipment. A typical scale up factor for conventional equipment in benchtop kinetics tests is 2 to 2.5 times. For the RFC this is a number less than 1, meaning you have a reduction in the flotation volume needed.”

There is a big potential market across all the major flotation markets including, but not limited to, coal, gold tailings, graphite, iron ore, copper roughing, moly cleaning – where in every case the RFC is operating on the left hand side of the kinetics curve. “We are seeing recoveries beyond what is possible in a conventional benchtop testing. In coal for example, the RFC performance is being predicted utilising a coal grain analysis method which gives the true ultimate flotation response. The RFC is operating on this curve, which is to the left of a traditional tree curve that is typically used to predict conventional flotation performance. That means in coal we are able to produce much lower ash product with very similar combustible recovery numbers than you would see with traditional coal flotation technologies. We are recovering much more coal – meaning the RFC has huge potential in recovering coal fines from tailings streams or retreatment of already stacked tailings for example. Beyond this, we can also offload overloaded coal flotation circuits as the RFC is a high capacity machine with a small footprint.” 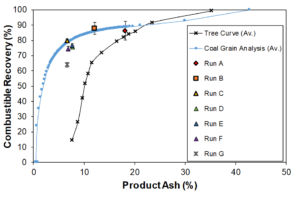 While coal has historically been the initial focus of the technology development recent testing in copper, moly, gold, iron ore, and graphite applications have all produced similar results in terms of improved grade and recovery along with a  reduction in required flotation retention time. “In some cases we are producing not only a higher grade product at a higher recovery rate but also in a shorter timeframe.”

RFC versus other technologies

Comparing it with other hydraulic technologies like column flotation, in that case you have two types of sparging systems – one is air introductory only which is based at the bottom of the cell; which has many similarities with conventional flotation. The other column flotation sparging system is a recirculating pump which draws material from the base of the column and passes it through the contact area – “in this respect there is a similarity with our RFC, except that the RFC sees the contact with the feed material where the concentration of the floatable material is at its highest in terms of the feed slurry, whereas in column flotation, the contact is usually with the tails of the column, where the floatable material concentration is at its lowest. The RFC’s method of contacting with the feed promotes the flotation kinetics better than with the tails.”

A comparison to the Imhoflot cell shows similarities in the initial first high intensity precontact step, but beyond this FLSmidth says the unique nature of the RFC segregation comes into play to bring performance well beyond what is possible with any other cell. All other flotation technologies also have froth recovery limitations – the RFC doesn’t really have a defined froth-pulp interface further promoting recovery.

Christodoulou adds: “The unique nature of the design and use of the lamella plates means this isn’t something you can retrofit onto existing conventional cells. To start with we see RFC flotation being able to work to  offload overloaded circuits in coal and base metal cleaner circuits, then start to replace column flotation circuits, and ultimately replace banks of open conventional cells, though there is still some way to go for full market acceptance before we get to that point.”

A number of trials have already been carried out with a pilot scale system that is similar in scale to the lab scale system except that the pilot testing has been on a continuous basis using a continuous feed. In addition to the pilot, FLSmidth and the University of Newcastle are currently trialling a two metre RFC machine in an Australian coal application. This full-scale evaluation is set to be completed early 2021. 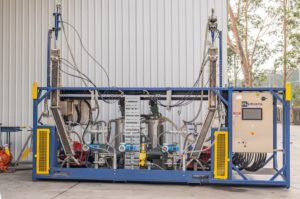 The pilot site trials use a containerised test skid housed in a standard 20 ft shipping container. The test skid can be deployed quickly and can be commissioned in less than a week, with typical test programs wrapping up in 4 weeks or less. Utility and feed requirements are minimal with typical tests requiring less than 100 litres a minute of feed slurry.