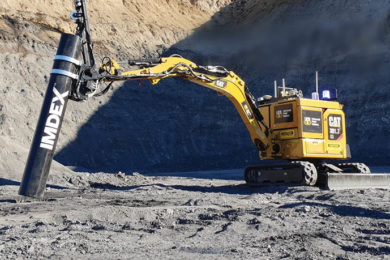 IMDEX Blast DOG, being developed in collaboration with Universal Field Robots (UFR) and tested at Anglo American’s Dawson coal mine in Queensland, won the Greyhound Innovation (METS) Award at the 2020 Queensland Mining Awards.

A semi-autonomously deployed system for logging material properties and blast hole characteristics at high spatial density across the bench and mine, IMDEX Blast DOG™ is commodity agnostic. It is a semi-autonomous system that helps optimise blasting based on high-resolution three-dimensional material models built from sensor data. It is aimed at helping miners get predictable fragmentation and determine ore and waste boundaries, and control vibration, dust, fumes and heave, the company says.

“No other technology has the capacity to produce the same data and provide as large an impact on downstream processes including enhancing productivity,” IMDEX said.

The judges said UFR and IMDEX conquered the challenge of logging blast holes, while removing operators from harm’s way.

IMDEX Chief Executive Officer, Paul House, said: “To be the winner among such esteemed competition is a testament to the team and our collaboration partners, Universal Field Robots, Anglo American, Teck Resources Ltd and Orica, supported by METS Ignited.

“IMDEX has a passion to provide the mining industry with purpose-built solutions. IMDEX Blast DOG is no exception and we are investing heavily in solutions that provide significant benefit to our customers.”

The IMDEX Blast DOG solution moved from concept to prototype in just four months which provided the platform and justification to develop a commercial version, IMDEX says.