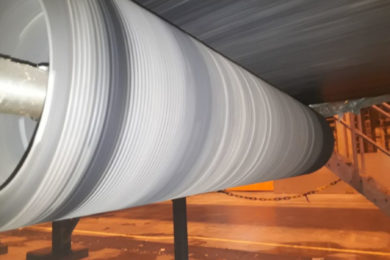 Scrapetec has added to its range of conveyor components with the new PrimeTracker belt tracker, which, it says, eliminates problems associated with conveyor belt systems, including misalignment, abrasion and belt damage.

Thorsten Koth, Sales and Distribution for Scrapetec, explained: “For optimum performance of a conveyor system, it is critical that the belt always runs straight on the conveyor, without sideways movement. Our new PrimeTracker belt tracker has been designed to automatically guide a conveyor belt back into the correct straight-line position, to prevent costly downtime and component replacement.”

One advantage of the Scrapetec PrimeTracker is that it is always operates in the idling position, unless there is sideways movement of the belt, Koth said. This system corrects misalignment immediately by guiding the belt back into the correct position, with no damage or abrasion to the belt or tracker, he added.

“What’s also notable, is the cylindrical shape and pivot bush that allow this belt tracker to swing and tilt during operation and to always be in full contact with the belt. Added to this, the Scrapetec PrimeTracker has the same peripheral speed over the entire surface of the belt, where traditional crowned rollers have different speeds at the centre and edges of the system.”

Other advantages include easy installation, low maintenance requirements and protection of belt edges and structure of the conveyor belt, according to Scrapetec. A strong corrugated EPDM rubber hose protects this system from dust and sand, while the rubber pivot offers soft suspension of the tracker shaft, ensuring extended service life of the system, the company added. This system can be installed in front of every return pulley, above and below the belt.