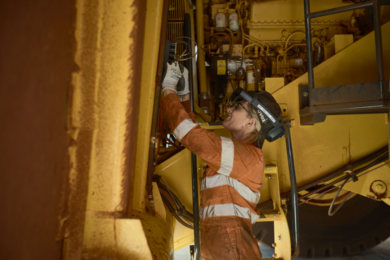 BHP, through the deployment of mixed reality Microsoft HoloLens technology, has managed to keep equipment inspected, serviced and maintained at its iron ore operations in the Pilbara of Western Australia in the face of COVID-19.

Workplace restrictions designed to keep people safe from COVID-19 mean that BHP hasn’t been able to fly people to and from its mine sites as freely as it did in the past.

To get around this issue, it has equipped people like Andrew ‘Woody’ Wood, a Mechanical Fitter with 30 years’ experience under his belt, with HoloLens 2 – a head mounted computer with a see-through display. This has allowed employees like Woody to coach his peers at site, anytime, from anywhere using Microsoft Dynamics 365 Remote Assist.

Woody is instantly able to see what mechanical fitters at site can see, send them helpful documentation, videos and schematics on the fly, and even use digital ink and arrows to annotate real things in the physical world in order to help them complete tasks and inspections on remote sites, Microsoft says.

For Alex Bertram, Digital Products Manager at BHP, the rollout of the technology was accelerated by BHP’s ability to innovate during the COVID-19 pandemic, with strong support from its partnership with Microsoft.

“Using mixed reality in its day-to-day operations is one of a series of innovations that BHP is undertaking to keep its people safe and its productivity up,” Microsoft says.

Leveraging IoT sensors and industrial computers connected to Azure the Dash solution gets data into the hands of maintenance technicians on their smartphone or tablet, the company says.

“Productivity and safety go hand in hand and are guiding lights for BHP and its innovation efforts,” Microsoft explains. “This focus enabled the team to have the first version of Dash in the field on a 400 t excavator within 16 weeks of it being an idea on a white board.”

To keep its people, families and communities safe during the COVID-19 pandemic, BHP introduced many rigorous measures and controls to reduce the risk of transmission.

This has included limiting numbers at its mine sites to only those required to enable safe operations; anyone who can work from home has done so.

At first, it meant that Bertram couldn’t get his team to the South Flank iron ore development to keep developing the Dash tool at the same velocity. Nor could many other experts who would typically be flown to a mine to set up new equipment, solve a problem or conduct an inspection.

Even so; “Our people on the front line are empowered to try new things to safely get on with the job”, Bertram says.

“During COVID-19, I expected the pace of innovation to slow, but we’ve seen the opposite. People really rally together and are open to trying new things to safely get the job done.”

He had already witnessed the potential of HoloLens and mixed reality, and was convinced that in combination with Dynamics 365 Remote Assist it would allow expertise to be delivered virtually to the teams still working at BHP’s Pilbara operations to support continued development of the Dash Maintainer Tools, Microsoft says.

“Given many of us were working from home due to COVID-19, the first device was delivered to my house to test and by the following week, we’d undertaken trials in our workshop environment in Perth,” Bertram says.

The team were able to test the system on real machinery at BHP’s Innovation Centre Lab, located at the Perth Repair Centre, which provides a safe and controlled environment to trial new technologies and ways of working on mining equipment.

“The following week, we ran a dry run and test at the mine, and five or six days later we supported the installation of the first prototype of Dash Maintainer Tools on a 300 t haul truck,” Bertram said. “A process like that would normally take a few months at least.”

It took less than four weeks from the HoloLens2 arriving at Bertram’s Perth home to it being used to install the first prototype of Dash tool on a Komatsu dump truck in the heart of the Pilbara, according to Microsoft.

The deployment of mixed reality technology has the potential to be rolled out more widely, and deliver safety and productivity benefits long after COVID-19 abates, Microsoft says. And there is further scope in making the physical delivery of equipment to sites more efficient.

“This technology can help us reduce the time and cost associated with regular travel, increase the speed of maintenance and new equipment deployment without compromising safety, and support greater inclusion and diversity,” Bertram said.

Having proven the HoloLens2 solution’s potential, BHP is now running further trials across its rail workshops and maintenance teams in Perth and the Pilbara, and at several other global locations in Australia, the US and Chile, according to Microsoft.

“We are seeing promising early results,” Bertram said. “If those trials are successful, we will look at how we can scale up. We are not getting ahead of ourselves, but we are well placed because the HoloLens2 solution speaks to our existing systems such as security controls, and device management.”