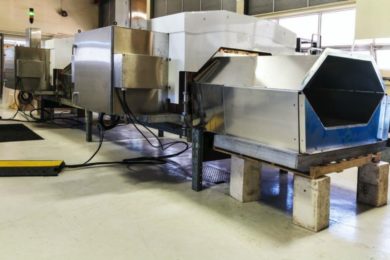 Having shown potential in lab-based test work to increase head grades at the Razorback project, NextOre’s magnetic resonance (MR) ore sorting technology is to now get an outing in South Australia at the high-grade iron ore development.

Razorback owner, Magnetite Mines, says it has entered into an agreement with NextOre to supply a mobile bulk ore sorting plant using a magnetic resonance (MR) sensor for a trial of the technology at the project.

The company said: “This advances our exclusive partnership with NextOre and is an important step in our journey to unlocking the potential of the Razorback project. The company is excited by the potential of the NextOre technology to enhance processing of by ‘pre-concentrating’ run of mine ore feed to increase plant head grade.”

The NextOre agreement includes a non-refundable deposit of A$100,000 ($71,418) and contemplates further, staged payments of A$700,000, Magnetite Mines says. The scope covers supply of a full-scale mobile ore sorting plant to site at Razorback for sorting magnetite ore using MR technology during the trial period for the purpose of mine feasibility analysis. The agreement includes milestone dates, with the equipment despatch from the CSIRO Lucas Heights facility, in New South Wales, expected in 2021.

Unlike traditional ore sorting technologies that are based on X-ray or infra-red transmission, NextOre’s on-belt MR analyser ore sorting solution allows for the grade of high throughput ore to be measured at industry-leading accuracies and speeds, NextOre says. Due to the high speed of the technology, the integrative system is able to perform the analysis, computation and physical diversion of waste ores down to one second intervals allowing for fast diversion or high-resolution sorting.

As previously reported, the company entered into an exclusivity agreement with NextOre granting Magnetite Mines exclusive use of its MR ore sorting technology for any magnetite processing applications Australia-wide and all iron ore applications in the Braemar (including New South Wales) for a period of four years.

Magnetite Mines Chairman, Peter Schubert, said: “NextOre’s magnetic resonance sorting technology, developed over many years in conjunction with the CSIRO, has a rapid response time allowing unprecedented selection accuracy and speed. The result is potential for a substantial increase in the head grade of plant feed, resulting in lower unit operating costs and a significant improvement in capital efficiency.

He added: “We are particularly interested in the potential of the NextOre technology to increase the grade of ore fed to the concentrator. The bulk trial of this exciting technology will contribute to the study work now underway.”

Chris Beal, CEO of NextOre said: “We are enthusiastic supporters of Magnetite Mines’ vision of unlocking the vast resources in South Australia’s Braemar region. Their disciplined approach, which leverages emerging technologies with well-established mining methodologies, is a testament to the team’s knowledge and experience in the field.

“In our collaborative planning, the Magnetite Mines methodology of carefully integrating mine and mill activities speaks strongly to the ability to generate the maximum value from bulk ore sorting solution. I am thrilled that NextOre can contribute to this transformative project and I look forward to jointly developing Australia’s reputation as a global leader in green resource extraction.”