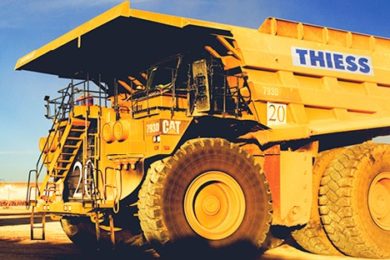 CIMIC Group is close to bringing in a new equity investor for its Thiess contract mining business, with Executive Chairman, Marcelino Fernández Verdes, saying in its latest financial results that due diligence had been completed and negotiations were expected to be finalised “in the coming days”.

Back in July, CIMIC Group announced it had signed an exclusivity agreement and was in advanced negotiations with funds advised by Elliott Advisors (UK) Ltd regarding the potential investment by Elliott into 50% of the share capital of Thiess. This would provide joint control of Thiess to CIMIC and Elliott.

Verdes said in today’s results that the introduction of an equity partner into Thiess “capitalises on the outlook for mining, provides capital for Thiess’ continued growth and enables CIMIC to strengthen its balance sheet”.

Within the September quarter, Thiess secured a A$340 million ($240 million) extension from Glencore to provide mining services at the Mount Owen coal operation in the Hunter Valley of New South Wales, Australia.

CIMIC Group said today that its companies are also bidding on work associated with the Winu copper-gold project in Western Australia, which Rio Tinto revealed a maiden inferred resource for in July; along with a mining extension at MACH Energy’s majority-owned Mount Pleasant coal operation in the Hunter Valley of New South Wales.