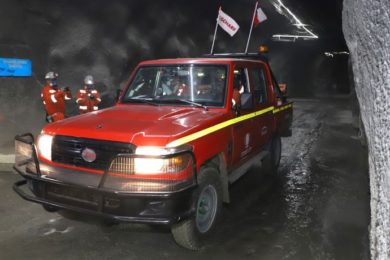 In Codelco’s El Teniente Division in the presence of the Minister of Mining, Baldo Prokurica, Minister of Economy, Lucas Palacios, the Executive President of Codelco, Octavio Araneda and the CEO of Engie Chile, Axel Levêque, one of the first all-electric mining trucks in the country’s mining industry, an SMT Scharf E-Cruiser, has been commissioned. Soon the mining complex is also due to start trialling an all electric Epiroc ST14 Battery LHD and already has a lot of experience with the Komatsu Mining Joy 18HD hybrid LHD.

The truck will operate as part of a joint project with Engie, who will be in charge of data monitoring and load management. It is a versatile electric vehicle that can cover extensive distances, both outside and inside the El Teniente underground copper mine. SMT Scharf has stated to IM that its standard E-Cruiser has a 150 km range (NEDC) and two hour charge time plus a high safety standard due to immersion-cooled battery cells, using a dielectric coolant. Each single cell is always kept at optimal operating temperature.

The E-Cruiser is currently undergoing a test stage in which it is planned to validate its operation in terms of power, resistance and energy consumption in underground mine and high mountain industrial road conditions. Codelco says the reduction in operating cost will be 70-80%, reduction of local emissions 100%, diesel consumption reduction 100%, maintenance cost reduction 30% and availability over 90%.

“We want to congratulate the effort that the administration of Octavio Araneda, Codelco’s Executive President, is making with electromobility. It is a commitment that Chile has made and that demonstrates it by being one of the countries that has the most electric vehicles in public transportation. Its incorporation into mining also generates important benefits. Electromobility is pure Chile because the vehicles have four times more copper and use lithium batteries that contain cobalt,” said Mining Minister Baldo Prokurica.

Given that this type of light truck is one of the most used vehicles in the national mining industry – Codelco has more than 1,300 diesel versions – this experience will promote a market for the development of this type of low-emissions equipment.

“At Codelco, we are taking the first steps in a great revolution that is taking place worldwide, which is electrification. We have defined a path towards increasing the incorporation of electric energy. We have a road map for underground mining projected to 2030, in which the majority of production equipment will be electric. Codelco is transforming itself and an important part of that process is innovation and technological development that goes hand in hand with sustainability,” commented Codelco’s Executive President, Octavio Araneda.

“Mining activity has been one of the engines that has sustained our economy in these difficult months. Without stopping, even increasing its production; with strict compliance with the established protocols, the sector has managed to drive forward our economy. When things they are done well, with the commitment of the companies and their workers, we can get ahead,” commented the Minister of Economy, Lucas Palacios, highlighting the leading role of the main Chilean state company and of the entire mining industry in the reactivation of the economy, which around the world has been hit by the current health crisis. Only at Codelco, planned investment in structural projects totals $20 billion between 2019 and 2028, generating employment and extending the useful life of its deposits between four and five decades.

The company states: “Currently, a large part of the electromobility solutions available on the market are not necessarily designed for large mines and their conditions, so it is necessary to develop pilot experiences to collect operational data and strategic designs that allow determining the requirements for a future massive implementation of these vehicles.”

“We are focused on developing solutions that contribute to greener and carbon-neutral mining. Our relationship with Codelco is long-standing and we have always been co-designing energy alternatives to make the business more efficient and sustainable. Today, we advance in this pioneering pilot in mining operations, which we are betting will open doors for a new phase of green mobility in the industry,” adds Axel Leveque, CEO of Engie Chile.

Autonomy, recharging times, vehicle wear, user experience and driving safety are some of the aspects that will be monitored during the 12 months that are contemplated for the industrial test of this truck, in order to determine and identify the conditions that allow scaling this type of technology in the state company.

It is worth noting that Codelco was also the first mining company in Chile to test an electric bus in its operations, both in the El Teniente Division and the Chuquicamata Division, which made it possible to incorporate buses for the transport of passengers in different geographical conditions, from the arid and wide desert to the roads on mountain ranges with high slopes and cold in the central zone. In addition, due to the complexity and specificity of underground mining, the state-owned mining company worked on the transformation of the first electric minibus from diesel equipment, a vehicle that has operated inside the El Teniente underground mine.