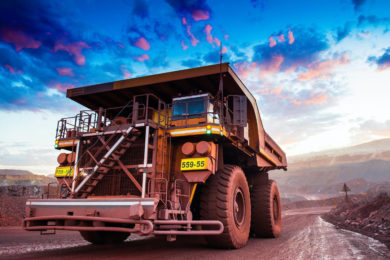 In its just released Sustainability Performance 2019 presentation, Anglo American had some interesting updates from Tony O’Neill, Technical Director, on how technology is enabling step change sustainability performance within the global mining group, centred on its FutureSmart Mining™ platform – “a catalyst for permanent positive change.”

These initiatives are integral to the company achieving its goal of reaching carbon neutrality across its operations by 2040.

First up on the 291 t FCEV haul truck, a conversion to hydrogen fuel cell and lithium battery operation of a Komatsu 930E, which will see first motion in H1 2021 at the Mogalakwena platinum mine in South Africa followed by intensive testing. For the first time, the company gave more detail on the expected upside and longer term plans. O’Neill said the total-cost-to-operate will be comparable to diesel today but would achieve direct parity by 2030. The FCEV trucks will allow for 50- 70% reduction in emissions (Scope 1 and 2 for open-pit mines) and Anglo says it has “seven sites in planning for rollout completion by 2030.” At Mogalakwena, a full 40 truck rollout is planned to start in 2024. The trucks themselves will utilise 4 oz of platinum in their fuel cells (each will use eight Ballard FCveloCity®-HD 100 kW modules).

The Williams Advanced Engineering (WAE) high-power modular lithium-ion battery system for the truck was built in Grove, Oxfordshire, and shipped to First Mode in Seattle who are integrating it with Ballard Power Systems fuel cells before the completed power unit will be shipped to South Africa for integration into the truck. At the mine, a Nel 3.5 MW electrolyser plant is under construction & will be capable of producing up to 1,000 kg of hydrogen per day. Most of the electricity for the hydrogen production will come from a nearby 320 MW solar array. The electrolyser capacity surpasses the daily demand of the truck, enabling storage for fuelling during night time or moments when solar radiation is poor, maximising the renewable share of the hydrogen.

On this topic, Mark Cutifani, CEO of Anglo American, said the use of green hydrogen could displace 650,000 t of CO2 emissions each year, which was the equivalent of removing 150,000 cars from the road.

More detail was also given on the company’s bulk ore sorting technology and projects, the design of which is a combination of grizzly, feeder, sizer, conveyors, diverter, stackers & associated equipment from MMD, used in conjunction with an ore scanning system, such as the pictured GEOSCAN-M unit at Barro Alto from Scantech which is a high-performance elemental analyser utilising Prompt Gamma Neutron Activation Analysis (PGNAA) to measure the elemental composition continuously in real time. 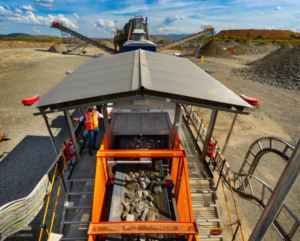 Aside from the hydrogen trucks and bulk ore sorting, other projects were mentioned in passing. The company is looking at more used of hydraulic dry stack engineered tailings that dry out in weeks, are geotechnically stable and can be repurposed and terraformed with up to 85% water recovery. Dry stacking is being first used at El Soldado where a unit is under construction and set for completion in Q3 2021.

On this topic, O’Neill said: “We are evaluating engineering on a full scale and to demonstrate to regulators what we believe to be the future of the industry.”

On what Anglo calls Coarse Particle Recovery, another term for Coarse Particle Flotation, it says the throughput increase can be from 15% to 20% with a plant cost of $10 million to $50 million depending on scale, with 20% energy reduction and up to 85% water recovery with HDS. Anglo has opted to use Eriez HydroFloat™ technology for coarse particle recovery with plant startup at El Soldado set for Q1 2021 (80% of volume), Mogalakwena North in Q3 (100% of volume) and further rollouts planned for Los Bronces, Quellaveco (copper, Peru), Mogalakwena & Minas Rio (iron ore, Brazil).

O’Neill also mentioned a “deep energy sink” project the company had been exploring. This is a way of confronting the issues of solar power only being generated during the day, while making use of empty mine space, and has the potential to generate some 800 MW of energy for 18 hours a day.

On project construction, O’Neill also talked about the potential to apply all of the company’s learnings into process plant construction where new technology could be switched in and out as it becomes available. While no dates were given for deploying such an approach, he did mention the eventual expansion of Mogalakwena within this discussion.