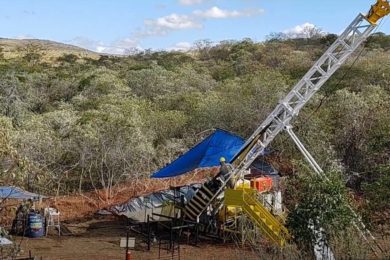 Metallurgical results from sample material collected from outcrops at the Trapia and Curiu deposits areas at Pedra Branca for two preliminary Platsol tests conducted at SGS Lakefield, Ontario, have shown recoveries of 93.4-93.6% for palladium and 95.3-95.7% for platinum were achieved.

The company now plans two additional Platsol tests, to be performed by SGS, to determine the effects of adding elemental sulphur to the autoclave to optimise conditions required for PGE and gold recoveries, it said.

Platsol is a high temperature (>200°C) pressure leaching process designed to recover PGEs, gold and base metals. It has been shown to be particularly effective with PGE ore feeds characterised by high concentrations of chromium and low concentrations of sulphide, much like Pedra Branca, according to ValeOre Metals. The PGEs and gold are solubilised as chloro-complexes by the addition of chloride salt to the autoclave, while base metal sulphides are oxidised to form soluble metal sulphate complexes. The precious metals can be recovered directly from the autoclave discharge slurry by carbon absorption, or by precipitation with sulphide ions.

Platsol consists of standard, proven traditional technologies that are in use in mines around the world, according to the company.

The Platsol tests are part of a comprehensive mineralogical evaluation ongoing at SGS to characterise the speciation of palladium and platinum in Pedra Branca mineralisation to guide future process optimisation initiatives.

As part of this, the company is continuing with Falcon Ultrafine gravity separation test work as a potential pre-concentration circuit to upgrade feed material and improve mass pull.

The company has also initiated hot cyanide leach test work to assess the recovery rates of palladium, platinum and gold in a cyanide leaching process, and will shortly commence shipment of 100 representative chip samples from historic drilling at the Esbarro deposit to Steinert’s facility in Minas Gerais, to evaluate the potential of sensor-based ore sorting test work.

ValOre’s Chairman and CEO, Jim Paterson, said: “The pace of success at Pedra Branca has increased dramatically in the last three months, including today’s release of PGE metallurgical recovery rates of in excess of 93% for palladium and 95% for platinum using the Platsol process.

“Together with an aggressive property-wide exploration program, we are now focused on rapidly optimising the conditions, procedures and processes to further maximise the upside potential of the Pedra Branca project.”