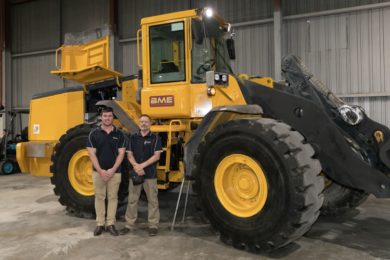 Aeris Resources has confirmed the arrival of the battery-electric retrofit ‘TRITEV’ 20 t underground loader at its Tritton copper operations, with the company having added the Integrated Tool-Carrier/Loader to its fleet at the New South Wales, Australia, mine.

3ME Technology and Batt Mobile Equipment (BME) unveiled this industry-first machine last month, with 3ME saying the machine would head to Tritton later this year as part of an initiative developed under Project EVmine, with the help of METS Ignited.

Based on a second-hand Volvo diesel-powered L120E, the TRITEV required a “ground-up rebuild” from the 3ME and BME teams, 3ME Chief Business Development Officer, Steven Lawn, told IM last month.

This included removing all diesel internal combustion engine components, except the transmission and drivetrain; modelling the expected duty cycle at Tritton; developing a battery-electric system to suit the application at hand; writing the vehicle control unit software; integrating the system into the existing platform; and providing a mechanical overhaul of the machine.

The 3ME and BME teams planned to test the machine at the Newstan mine, in New South Wales (previously owned by Centennial Coal and now on care and maintenance), ahead of sending to Tritton.