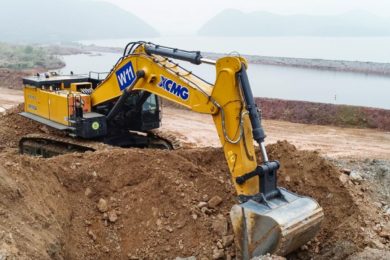 BuilderX is one of a new breed of fast evolving start-ups involved in the rapid transformation of China’s mining industry as it embraces automation with the help of 4G and 5G networks. IM Editorial Director Paul Moore caught up with CEO Shaolong Sui, a Stanford graduate, who has already advanced the company to one of the key tech players in the development of semi-autonomous, teleremote excavators for mining, including a major project with XCMG to deliver a 95 t XE950DA teleremote excavator solution for Jiangxi Copper 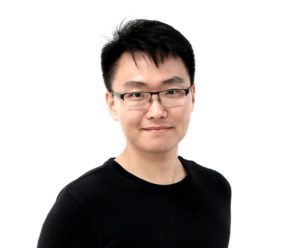 IM: Can you provide some background on BuilderX and its journey so far?

SS: We were only founded in August 2018, with the goal of providing productive remote control solutions for machines in mining and construction as well as other industries like tunnelling – to increase safety as a priority, but also improve productivity and also to get more young people interested in working in mine operations where they don’t have to live in a remote location. While remote control has been tried before in construction mainly, operator situational awareness and time lag were a major issue which we have addressed using better sensors and algorithms to add automation functions to assist the operator. We treat the operation of the excavator arm like a robotic arm, using sensors to allow much more accurate and quick movements, for example. For proximity detection we have a 360 degree camera. 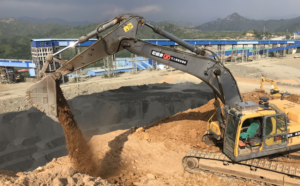 IM: How did the project with XCMG happen, had you worked with them before on other projects for smaller construction class machines?

SS: We didn’t have any collaboration with XCMG before this project, but this project definitely won’t be the only one with them going forward. We were helped with some media exposure in Japan’s business title Nikkei Asia at the beginning of this year (https://asia.nikkei.com/Business/Startups/The-automation-technology-helping-cut-mining-costs), and soon XCMG contacted us via our website. Our first meeting was quite interesting, they said they’ve been investigating many technology companies for this project, but none of those companies meet XCMG’s requirements – productivity and safety are their main concerns. So we just turned on our remote control system and let them test a teleremote machine in our office, specifically our retrofitted 36 t Volvo EC360 unit 40 km away, controlled through 4G network communication and our BuilderX ULLS (Ultra-Low-Latency-System). They tested it for a whole day, and then decided to work with us.

IM: What other experience have you had in working with automation of mining machinery and what has been learned so far?

SS: We tested our remote control Volvo excavator in a minesite of ShouYun Mining near Beijing for almost all of 2019. We gained lots of experience through the test. For example, pure remote control doesn’t allow loading fast because it’s hard for an operator to estimate the loading point through a 2D screen. This is where AI comes in, giving some depth of field. Another example is that excavators are supposed to flatten and clear the loading area when one truck has been loaded and another is coming in to stop. Sometimes operators also need to find a suitable joint or seam to dislodge material. Pure remote control is not a cure for all, and too many screens will just distract operators. That’s why we developed many automation and AI functions. Theoretically, it’s a remote-controlled and semi-autonomous excavator. We are also applying our technology to drill rigs. These will not only be applied in mining, for example they are being used in the Sichuan-Tibet High Speed Railway project, which involves lots of tunnelling projects. 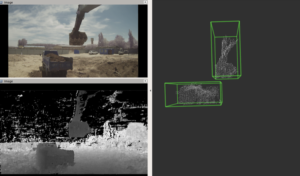 IM: Are you also working with any other mining excavator manufacturers aside from XCMG? Can the technology be applied to very large machines such as 700 or 800 t units and is this part of the XCMG plan?

SS: We are currently working with many manufacturers both in China and internationally. We will have more news to share soon. Our technology can be applied to any make and type of excavator, including 700 t or above. XCMG’s plans are confidential, and we are not authorised to release any further details on future projects. The technology can also be applied to large electric rope shovels. However, it’s not our first priority right now since it’s a relatively niche category in terms of numbers of operating machines.

IM: You say you have applied robotic automation technology to achieve precise moves as well as combined multiple sensors as well as strengthening the background algorithm to increase accuracy & efficiency. Can you provide any more detail on the types of sensors you have used?

SS: The sensors we use are mainly inertial measurement units (IMUs) and cameras. These are commonly used sensors but can be applied in harsh environments. The algorithms behind them are the key, however. It is also important to say that we are not obsessed with applying fancy technologies for the sake of it. We are more focused on solving the real mine operator problems with stable and mature technology. Stability and usability is what our customers want. 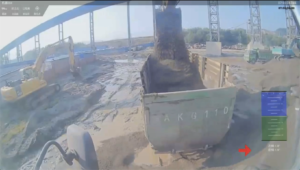 IM: What were the main challenges in getting the system to work?

SS: The most difficult part is user training. Operating a mining excavator through remote control will definitely never be the same experience as being in the cabin. Operators need a lot of training and practice. We need them to be confident before running the excavators in primary production roles.

IM: Is the machine now actively working in normal production at the Jiangxi Copper mine and which mine is it working at?

SS: It’s working at Chengmenshan copper mine near Jiujiang City in Jiangxi Province. Since we just delivered the excavator a few weeks ago, their operators are still in the training period. But we believe that soon the machine will transition to normal production.