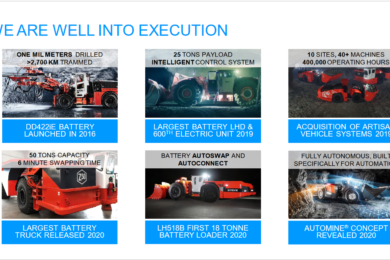 During today’s Electric Mine virtual conference, which precedes the physical conference coming up on March 15-16 2021 in Stockholm, President of the Sandvik Mining and Rock Technology business area Henrik Ager had some interesting updates on the company’s battery electric offering progress to date and plans for the future. First off in the Q&A, as part of the company’s aim to have a “full range electrified offering by 2022” he confirmed that it is currently working on development of a battery 65 t class truck, which will become the largest available in its range, above the current Sandvik (Artisan Vehicles) Z50.

He added that there are no special challenges in going this large other than the obvious issue of the battery being bigger so the charging becomes a bit more challenging. He added “when you have self swapping batteries and can swap batteries fast, you don’t have to charge them fast. If you try to do fast charging of a 350 kWhr battery and want to charge it in 15 minutes then you need 1.4 MW of power. But if you can charge it in one or two hours, then this comes down significantly so it make it a lot easier to have these bigger machines.”

The existing Z50 self-swapping system means a battery can be changed out in six minutes. The new AutoConnect feature, available for the first time on the LH518B loader, is making swapping even easier and faster by automatically connecting and disconnecting the battery pack to the machine, Sandvik has said. Aside from unplugging and plugging in the charger, the operator doesn’t need to leave the cabin, which saves minutes on the swapping procedure and decreases effort and risk in the swapping process.

He said having the self swapping capability and the underground charging stations themselves being easy to move and reconnect to the mine electric grid is therefore very important in larger classes of BEVs but also to reflect the underground reality. “The production environment in an underground mine moves, so you need to move with it.”

Looking more at the overall picture he adds: “Our vision is to be the market leader in electric mining equipment and to be the preferred partner of our customers, and to drive the adoption of fully electric solutions. This takes time, this is new, we are busy working with many customers, and there is a lot of excitement in going electric but it takes time to learn, mining has been using diesel for a very long time.” The infrastructure, the processes and the skills involved in diesel powered underground mining are well ingrained with customers but with electric it is all new. That said the prize is improving the operator environment with less heat, noise and vibration; driving the mine economics with lower TCO, higher productivity and lower ventilation costs plus of course contributing to global sustainability by helping combat climate change by removing a significant proportion of underground mine emissions.

And Sandvik’s progress so far is impressive. On one of his presentation slides, he said that following the acquisition of Artisan Vehicle Systems in 2019, there are now ten mining sites with its BEVs running, with 40+ machines and over 40,000 operating hours. In underground hard rock drilling it will soon have a full range of development and production battery machines, with the DD422iE jumbo already having drilled 1 million metres and trammed over 2,700 km. It has been joined by the DL422iE for production and DS412iE rock bolter plus other machines will be added in the coming years including the DT922iE, DS422iE, DL432iE and DT1132iE/DT1232iE.

Lastly, it is also important to remember that the company’s hard rock cutting solutions are also all-electric so using these in place of conventional mobile machines where it makes sense will also be default electrify an operation. These include of course its well proven roadheaders but also the MX650 Rapid Mine Development System, which is in the final refinement stage and has already seen good performance working at the Sandvik-owned Wolfram mine in Austria which supplies some of the company’s tungsten needs for the tungsten carbide used in rock tools & tooling, and lastly the MN330 Narrow Reef Production System being developed together with customer Anglo Platinum, and Ager said it is showing very promising results so far.