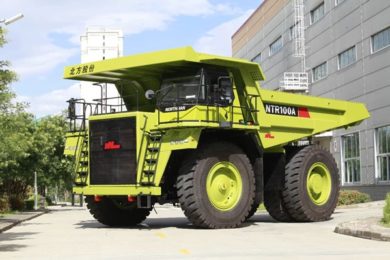 China’s leading mining truck OEM, Inner Mongolia Joint Stock Co Ltd (NHL) has for many years offered the 91 t class TR100 mechanical drive truck, based on the original Terex design & built using kits supplied by Terex in the UK. Volvo (which by then owned the Terex Trucks business based in Motherwell, Scotland, UK) divested its remaining 25.2% stake in NHL in 2018, and NHL has since then been restructuring its product range to meet market realities including the rapid increase in autonomy projects in China. It started by developing its NTE electric drive range to replace the previous MT Series trucks based on Unit Rig designs but it has now turned its attention to its mechanical drive range, starting with a new model of the 91 t truck called the NTR100A, where N stands for new.

NHL describes the NTR100A as “a new generation” of 100 ton (91 t) class t,rucks with a rated engine power of 1,050 hp, and a maximum speed of 46 km/h. “This model breaks through the constraints of the traditional structure of existing models, combines years of use and design experience, utilises current advanced design methods and analysis tools, incorporates new technologies, new materials, and new processes, and is a new generation model developed with multiple technologies.” The first model was recently delivered to a minesite for operational testing.

The NTR100A is also autonomy ready as the existing TR100 was not ideally suited to autonomous operations (though customer Anhui Conch Cement has recently converted 18 TR100A models to unmanned operations through subsidiary Haibo Intelligent Technology working with Huawei Technologies), and autonomous projects are now sweeping across the Chinese mining industry. NHL also has a partnership with leading Chinese autonomous technology company TAGE Idriver, including working together on a new fleet of 10 autonomous NTE200AT 186 t trucks for SPIC’s Huolinhe coal mine.