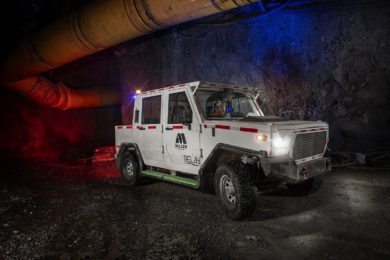 Miller Technology has sealed a significant contract for its Relay battery-electric utility vehicles, with units set to start up underground at an operation owned by an Australian major miner.

Designed for the harsh environment and rigorous duty cycle required to operate in underground mines, the Relay features an industry first dual charging system allowing for both off-board DC fast charging and on-board AC opportunity charging, according to the company. This can see a single 25-minute charge time provide enough power for a 10-hour mining shift, according to Robinson.

At least one Relay unit has already had an outing in the industry, running at Alamos Gold’s Young-Davidson mine, in Ontario, Canada. On reviewing data from this trial, Paul Summers, Lead Developer, Electric Drive Systems, at Miller, previously told IM that it was clear battery-electric vehicles were suitable for utility and support applications, even in hard-rock mines with steep ramps.

On top of the Relay, Miller Technology also produces a Toyota Land Cruiser BEV, “believed to the best of its type by all those miners who have compared the three major units on the market”, Robinson says, while the company is also preparing to release a battery-electric underground grader.

“Around Q2 (June quarter) next year, we’ll also have an underground grader available utilising the same drivetrain as the Relay and, therefore, the same fast chargers,” he said.

The company has also received requests from the unnamed major Australian miner to produce 12-seat personnel carriers based on the Relay platform, according to Robinson.