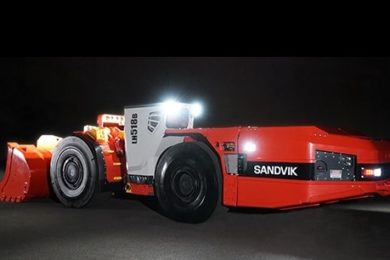 Kirkland Lake Gold, one of the leaders in battery-electric vehicle adoption in mining, is to trial a Sandvik LH518B LHD next year at its Fosterville underground mine, in Victoria, Australia, Rob McLean, the operation’s Chief Mining Engineer, has confirmed.

Speaking during a session titled: ‘What are Fosterville’s Current and Future Technology and Innovation Requirements, and Why?’ at the IMARC Online event, McLean said the trial is part of the company’s vision to “have a fully electric mine”, with the immediate goals being to remove diesel emissions and reduce heat at the operation.

Longer-term, electrifying the company’s fleet could result in the need for less ventilation, lower power costs and the elimination of infrastructure upgrades at the high-grade gold operation, he said.

Sandvik launched the 18 t battery-electric LH518B during its Innovation in Mining event in late September.

The loader, a Sandvik and Artisan Vehicle Systems joint development effort, has been designed from the ground up, entirely around the loader’s Artisan™ battery system and electric driveline to best leverage the possibilities the battery technology brings, Sandvik says. It can fit in a 4.5 x 4.5 m tunnel and is equipped with three 2,000 Nm permanent magnet motors and 450 kN of tractive effort. It can operate at speeds of up to 30 km/h and has 560 kW of continuous power output (peak power output of 660 kW).

McLean said the trial of the LH518B would inform the mine’s future electrification direction, but he said the company was also considering the use of battery-electric or trolley assist trucks at the operation, in addition to battery-electric charging/spraying rigs.

Kirkland Lake says its Macassa mine, in Ontario, Canada, is a “world leader in the use of battery-powered equipment” with more than 80% of its fleet made up of battery-powered vehicles from the likes of Artisan, Epiroc and RDH Scharf.