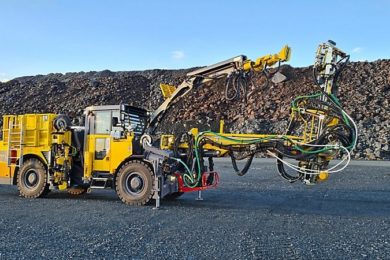 Having tested out Epiroc’s battery-electric vehicles over the past two years as part of the SIMS project, Agnico Eagle Finland’s Kittilä gold mine has now started up its own Boltec E Battery bolting units.

The European Union-funded SIMS project and the related field tests of Epiroc’s battery-powered mining machines turned the eyes of the mining world to Kittilä, in northern Finland.

As part of the project, which took place during 2017–2020, Epiroc’s ‘green machines’ – the Boomer E2 Battery, Scooptram ST14 Battery and Minetruck MT42 Battery – were put through their paces.

Andre Van Wageningen, Manager of Technology and Development at the Kittilä mine, said: “The collaboration with Epiroc has been great and Epiroc has taken away all the concerns we had regarding battery-electric equipment. I believe that we also have supplied a very good test site.”

Tommi Kankkunen, General Manager of the Kittilä mine, added that the benefits with battery-electric equipment are obviously the reduction of fossil fuels and the reduction of carbon footprint, but also major advancements made to health and safety for its employees.

After the tests, the mine purchased its first battery-powered rigs, Boltec E rock bolting rigs selected as the first battery-powered units in line with the mine’s investment plan. The important drivers behind the decision were sustainability of the rigs and the opportunity to create a better work environment, according to Epiroc.

The first bolting rig arrived at the Kittilä mine in early November, with another similar bolting unit joining the club a couple of weeks later.

According to Jari Kolehmainen, Production Manager at Kittilä, the first messages were very positive: “The performance of the machines is at least at the same level as that of diesel machines. Productivity has improved with the development of equipment.”

The arrival of this new equipment will also benefit operators’ wellbeing at work as exhaust fumes, heat, vibration and noise have decreased.

“For example, a rock bolting rig is moved several times during a shift, and, in the past, it has always meant starting diesel engines and blowing up an exhaust cloud,” Epiroc said.

Also, in terms of maintenance, the equipment lacks a large component (diesel engine), and, as a result, oil and filter changes are omitted. Also, for fire safety, the use battery-powered machines mark a step forward in the absence of hot surfaces of the diesel engine and moving oils.

Kolehmainen said: “Especially on the loading and haulage side, the change in air quality is clear. In the future, we want to reduce our carbon footprint and move towards zero-emission technology, as well as move forward in wellbeing at work.

“The SIMS project showed that battery technology has made great leaps forward.”

In terms of infrastructure requirements, the mine’s electricity network should accommodate the electrification of the equipment. Battery-powered machines also require a battery replacement location.

Epiroc added: “Agnico Eagle Finland’s Kittilä mine wants to profile itself also towards the introduction of other new technologies in addition to battery-powered equipment. A remote control room has been completed for the mining office, from which several machines are controlled simultaneously.

“Since the beginning of October, it has been a permanent turn for two people to operate mining machines remotely. The mine firmly believes that investing in new technologies will bring long-term benefits.”