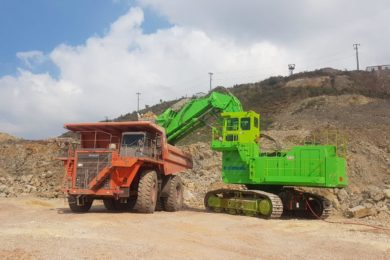 Sometimes advances are made by smaller mining companies who set out to make changes themselves using their own innovations. Çimnak Co, a subsidiary of Nuh Cement Inc in Turkey, supplies Nuh Cement with 3.7 Mt of marl annually. Diesel-powered machinery is employed at the quarries and the annual diesel fuel consumption is well over 2 million litres. Diesel fuel is not only a substantial cost item but also the primary source of CO2 emissions. A team of Nuh Cement and Çimnak engineers has been working on the possibility of decreasing diesel fuel consumption and replacing it with electricity, and if possible with green electricity. 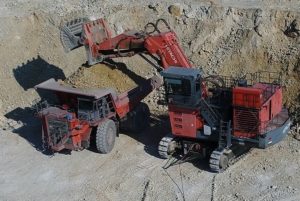 The conversion project reduced not only the annual CO2 emissions of Nuh Cement by 1,400 t but also the annual diesel fuel consumption by 520,000 litres. Additionally, an already-discarded shovel of EX1200 was put back into daily operation. Moreover, the electricity consumed at the shovels was fed from the waste heat recovery plant of Nuh Cement which generates electricity out of hot gases exhausted from the clinker kiln. So this additional feature makes the conversion project truly all-green.

Background to the project

Since 2014, the management of Nuh Cement has been actively encouraging the objective of CO2 neutral green cement production. Considering the high CO2 emissions of cement production by its very nature, the CO2 neutral green cement production initiative is a very ambitious plan to realise. The first significant step was the commissioning of the waste heat recovery plant which produces electricity out of the hot gases exhausted from the clinker kiln. The annual electricity production is well over 100 million kWh or 23% of Nuh Cement total electricity consumption. The second step was the commissioning of the hydroelectric power plant capable of producing 30 million kWh annually. Together with the waste heat recovery plant, almost 30% of the cement factory electricity consumption is produced from green sources. Besides the green electricity production initiative, the fuel consumption side of the CO2 emissions has to be dealt with carefully. A detailed analysis has revealed the fact that diesel fuel consumption is a considerable source of CO2 emissions. Thus in 2016, a thorough study was carried out to find ways to cut diesel fuel consumption, which is dominated by the loading shovels and excavators at the quarry. The proposed solution was to replace the diesel engines of the loading shovels with grid-connected all-electric motors. A battery-electric solution was discarded outright from the very beginning due to cost, lifespan, and power efficiency issues.

The first conversion and key results

With the first shovel conversion, various technical and administrative concerns were taken into consideration:

In order to convert to electricity, it involved adding an electric motor (500 kW), a cable drum behind the machine that can spread and collect cable, 100 m of cable, 6.3/0.4 kV dry type transformer and mounting electrical control panels. It took about three weeks to assemble the necessary equipment for the conversion of the electric shovel. 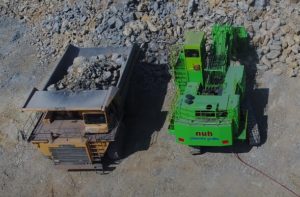 The company says that the electrically operated machine works in a similar fashion as compared to the diesel version in terms of power and performance such as loading time, bucket digging force, etc. It has reached its maximum design power by electricity, saving diesel fuel, engine oil, antifreeze, cooling water, fuel filter, and engine oil filter. The Hitachi EX1200 hydraulic shovel, powered by electric motor-driven hydraulic pumps, has been turned into a more efficient, greener, quieter machine without sacrificing power and performance. The electrically-driven hydraulic shovel demonstrated almost 95% overall energy efficiency whereas the diesel counterpart can only achieve a mere 25% efficiency. Of course it was necessary to purchase the cable drum to prevent cable related accidents. But overall the 17-year-old almost-obsolete shovel was revitalised and the service life was extended which translates into significant savings as compared to a brand new shovel purchase.

Challenges faced during conversion included ensuring shovel operator training for cable drum usage to maintain smooth operation such as being careful not to crush the cable laid on the ground by other machines working in the vicinity. It was also deemed to be good practice to protect the cable laid on the ground by placing it inside a pipe. It was also necessary to employ a technician with medium voltage (34.5 kV) experience.

Results in efficiency and costs

“In order to calculate the total savings of the conversion, the kWh cost of diesel fuel and electricity has to be incorporated into the equation. The cost changes from region to region and from time to time for a specific location. In our case, the Nuh Cement diesel fuel procurement rate is roughly 1.4 times more expensive than the electricity procurement rate on a yearly average. Thus, the per-tonne-fuel cost of a diesel-powered shovel is 5.3 times (3.8 x 1.4) that of an all-electric shovel. The savings associated with the periodic maintenance costs of the diesel engine are not included in the calculations, which will further increase the savings of the electric conversion. The conversion has the effect of reducing the workload on the maintenance team simply because the most time-consuming maintenance workload of the quarry machinery is comprised of the diesel engine, radiator, and diesel pump. Annual consumption of more than 520,000 litres of diesel fuel has been saved which translates into a reduction of CO2 emission by 1,400 t. Moreover, the EX1200 shovel which completed the useful service life has been rejuvenated.” 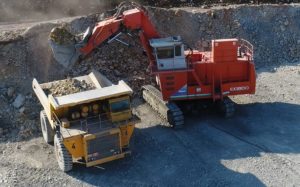 The team is now working on the following steps:

“The conversion-to-electricity project seems to have paid off the expenses incurred and the endeavour for the benefit of Nuh Cement and the environment. Besides, the project has opened an opportunity window for cost reduction and environmental consciousness. Since the electricity consumed at the shovels was fed from the waste heat recovery plant of Nuh Cement which generates electricity out of hot gases exhausted from the clinker kiln, the conversion project is all-green and probably one of its kind in the world. A satisfactory project has been implemented which is aimed at reducing CO2 emissions as well as the cost.”