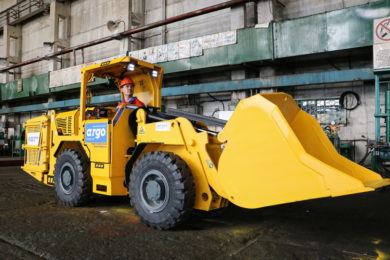 A multilateral cooperation agreement was recently signed between the Ministry of Industry and Trade of the Russian Federation, ARMZ Mining Machinery, LLC and diamond mining giant Alrosa. The document is aimed at developing partnerships for creation of domestic modern technologies, machinery and equipment used in opencast and underground mining, as well as developing the mining industry and heavy engineering in Russia.

“Our country has all the necessary conditions for the development of certain areas of mining machinery production: from growing domestic demand of the largest mining companies to machine-building facilities capable of satisfying it. The active work of the Ministry of Industry and Trade of the Russian Federation is aimed precisely at the consolidation of these resources,” noted Deputy Minister Mikhail Ivanov.

“Among other things, the signed agreement stimulates the creation of new models of mining machinery under the ARGO trademark. We already have a successful experience in providing battery-powered load-haul-dumpers for the largest uranium mining enterprise: E.P. Slavsky PIMCU, PJSC. I am sure that we will be able to replicate this experience for other mining companies in our country interested in high-tech domestic machinery, such as Alrosa,” commented Igor Semenov, Chairman of the Board of Directors, ARMZ Mining Machinery, LLC.

ARMZ Mining Machinery, LLC was established less than a year ago. During this period, the company implemented a project for the production of 140B lithium-ion battery-powered load-haul-dumpers from scratch. The machines have been tested and are successfully operating at the mines of E.P. Slavsky PIMCU, PJSC. Currently, seven units of machinery have rolled off the assembly line; the company received an order for another eight units for the next year. In general, the facilities will allow producing up to 50 units of mining machinery per year.

In 2019, France’s Aramine signed a partnership agreement with Russian uranium producer, ARMZ via ARMZ Uranium Holding Co (Mining Division of Rosatom State Atomic Energy Corporation) to allow the assembly of the L140B battery-powered miniLoader design in Russia by ARMZ Mining Machinery as project operator. It now produces the machine, referred to as the ARGO 140B, at the PIMCU mining complex in Krasnokamensk, in the Trans-Baikal Territory of Russia – it is significant as it made ARMZ Mining Machinery the first and only company in Russia and the CIS producing lithium-ion battery-powered mining equipment.

Recently the Expert Council on Sustainable Development of Rosatom State Atomic Energy Corporation also approved a project for the manufacturing and use of battery-powered load-haul-dumpers (LHDs) as promoting higher sustainability across the nuclear energy value chain.

“The world does not stand still; previously, the economy was driven by business goals, whereas today big companies are getting increasingly concerned for their ecological footprint. One of the most important items on the sustainable development agenda is to minimise the environmental impact. In particular, we are seeing a rapid transition of the mining industry to battery-powered equipment. The abandonment of diesel machines considerably reduces carbon dioxide emissions, while, inside the mine, the replacement of each load-haul-dumper yields tangible results,” said Igor Semenov, Chairman of the Board, ARMZ Mining Machinery, LLC.

The company says its estimations prove that the operation of battery-powered ARGO LHDs is more efficient than their diesel analogues in terms of sustainable development, primarily, due to zero air pollutant emissions. In addition, battery-powered equipment reduces noise generated by mining operations. Therefore, present-day technology significantly mitigates the negative impact both on workers’ health and on the environment.

Seven lithium-ion battery-powered ARGO LHDs are currently employed in the uranium mines of PIMCU, PJSC — the largest uranium mining enterprise in Russia. This year, they plan to manufacture and introduce into operation another eight machines.

ARMZ adds: “According to forecasts, the battery-powered equipment market will actively grow and, in as soon as five years from now, similar diesel and battery-powered machines will cost the same, while PIMCU’s transition to a battery-powered LHD fleet is proved to be economically feasible even today. ARMZ Mining Machinery, LLC managed to cut the LHD price cost by 20% as compared to the overseas counterparts due to a number of organizational and technological solutions. In the future, the company will continue to work towards competitiveness with local facilities manufacturing lithium-ion batteries as the next project phase to be implemented in cooperation with RENERA, LLC (part of TVEL, JSC).”