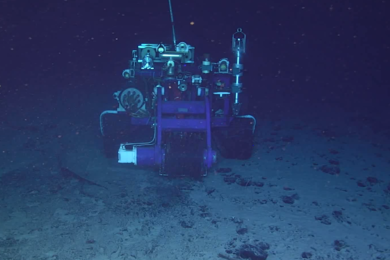 In an industry first, the American Bureau of Shipping (ABS) has awarded China Merchants Industry (CMI) Approval in Principle (AIP) for its deep-sea mining system design. The AIP follows publication of the ABS Guide for Subsea Mining in October 2020 and is the first to be issued that conforms to the new Guide. ABS is a leading global provider of classification and technical advisory services to the marine and offshore industries.

“Demand for resources to support the low carbon economy means sustainable subsea mining will increasingly be viewed as a key technology. As the leader in offshore classification, ABS is pleased to be able use its experience to support CMI, which is taking an important step in the development of a subsea mining system and we look forward to continuing cooperation with CMI in this important field,” said Matt Tremblay, ABS Senior Vice President, Global Offshore.

“The prototype of the deep-sea mining vehicle developed by CMI was successfully tested in September on the seabed 1,300 m below the South China Sea and completed the first joint operation test with a manned submersible. We really appreciate ABS support and assistance in the development of this subsea mining design,” said Xian-Fu Hu, CMI General Manager.

Liu Hejing, Senior Engineer of China Merchants Group Marine Engineering R&D Centre said during the testing the cobalt-rich crust mining vehicle completed the separate operations of seabed walking, cutting and crushing, and sample acquisition, and other seabed functional tests, and cooperated with the ‘Deep Sea Warrior’ manned submersible. In joint operations, in-situ real-time monitoring and sampling were continuously carried out in the mining test area, and the environment before and after the test were sampled and investigated respectively.

In October 2020, ABS published the Guide for Subsea Mining, detailing class requirements for the design, construction, operation, and survey of mobile offshore mining units. The landmark publication follows global interest in resources on the sea floor  to support the emerging low carbon economy.