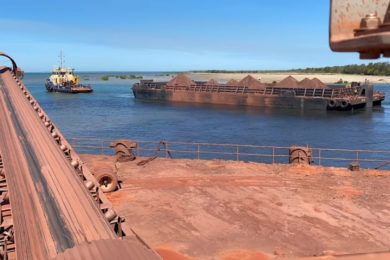 NRW Holdings has been awarded the mining contract for Nathan River Resources’ Roper Bar iron ore project in the Northern Territory of Australia.

Roper Bar has a fully integrated ‘pit-to-port’ logistics chain including a privately-owned 171-km paved access road to an existing barge load-out facility and product stockyard, according to NRW.

The project was commissioned in October 2020 with first direct shipping ore (DSO) exports in November. Production ramp-up is nearing completion, with four vessels now completed (around 220,000 t). An offtake agreement exists between Glencore and NRR for the marketing and distribution of iron ore from the project.

This contract award covers the Stage 1 operations at Roper Bar, with production of 4.6 Mt of DSO and 1 Mt of dense media separation production at 1.5-1.8 Mt/y over three years. The contract scope includes drill and blast, load and haul, clearing and grubbing, top-soil and subsoil removal and rehandling of ore stockpiles.

The contract value is circa-A$123 million ($95 million) and has a duration of 33 months. At its peak, there will be around 55 site-based personnel on the project.

NRW’s CEO and Managing Director, Jules Pemberton, said: “NRW is pleased to be involved in the recommencement of the Nathan River mine site and looks forward to its successful execution.”