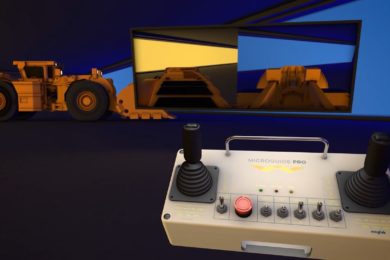 Quebec-based Meglab says it has launched a versatile remote operation system for mobile machines that can adapt to any type of vehicle.

The company’s research and development (R&D) team has, for many months, been working on the manufacturing of this remote operation system. The challenge – as the team saw it – was to build on one of its existing products, the MicroGuide™, which already supports short distance remote operation, and adapt it to allow remote operation over a longer distance or from the surface.

“Our workshop tests were conclusive and our real-world testing of the prototype in an underground mining operation at the Beaufor mine (owned by Monarch Mining Corp) confirmed that the product was ready for production,” Roger Ouellet, R&D Manager at Meglab, said.

What sets Meglab’s technology apart is the ability to customise the system according to each mine’s preferences, or according to the type of vehicle used, the company said.

Ouellet explained: “We tested the prototype on a Caterpillar-branded LHD owned by the mine. However, the MicroGuide Pro Surface Edition can be installed on any brand of vehicle. Also of interest is the wide range of joystick options available to control the machine.”

The pandemic is accelerating the adoption of remote operation by encouraging a reduction in the number of workers on mining sites, Meglab says. The MicroGuide Pro Surface Edition offers the ability to operate from anywhere, as long as broadband connectivity is available.

Kim Valade, General Manager at Meglab, said: “We have already started discussions with companies that want to expand their use of remote operations. This certainly increases the efficiency of operations, but the greatest area of impact we are seeing is on the safety of workers. Risks are reduced when workers can operate from the surface, or even simply from a greater distance underground.”

The MicroGuide Pro Surface Edition has several safety features, including a barrier system that shuts off the vehicle engine when a potential hazard is detected. The system works on existing telecommunication networks installed in the mines, provided they are powerful enough.

Valade added: “Our specialists can audit and analyse existing telecommunication networks. They can also make recommendations and/or install new infrastructures to ensure that customers can fully benefit from the MicroGuide Pro Surface Edition’s many features.”

The company concluded: “Today, mining companies are rapidly developing and adapting their processes to provide added value such as real-time decision making, increased travelling efficiency and greater worker safety. The implementation of remote operation with the MicroGuide Pro Surface Edition contributes to the successful achievement of these objectives.”