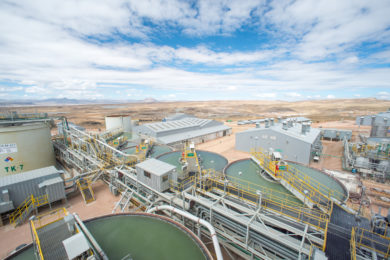 Hochschild says it has approved a $7 million budget to construct an ore sorting pilot plant at its Inmaculada gold mine in Peru in 2021.

The investment follows previous test work carried out with both TOMRA and Steinert. This saw the company conduct initial bulk testing in Germany with both companies and a 20-t pilot scale test with Steinert in Brazil.

The company also enlisted the help of Ausenco to carry out a prefeasibility study on applying ore sorting at Inmaculada.

He said, in addition to consulting with TOMRA, Steinert and Ausenco, the company had been working in-house to improve the sensors and the algorithm that separates the ore from the waste in these sorters, with the technology showing a clean separation between the quartz-based mineralisation and the andesite holding the rock at Inmaculada.

In its latest financial year results released today, Hochschild said of the ore sorting investment: “We believe this project may eventually deliver significant improvements in recoveries at the mine and potentially help to optimise other key projects in Hochschild’s portfolio.”