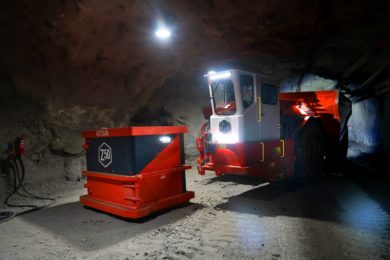 With production at the Macassa gold mine in Ontario, Canada, set to ramp up over the next three years, Kirkland Lake Gold is, once again, bulking up its fleet of battery-electric equipment.

In its just released December quarter results, the company confirmed it recently purchased five 50-t battery-powered underground haul trucks for the operation, with the first already delivered in the current quarter.

The loaders in question are Artisan Z50s, which have a 50-t payload and are equipped with AutoSwap, a patented self-swapping system for the Artisan battery pack.

Macassa is a first adopter of battery-electric equipment, testing out early protoype versions of machines and now having a large fleet of trucks and LHDs from the likes of Artisan and Epiroc.

Kirkland Lake has big plans for Macassa, with the #4 Shaft project underpinning much of the planned growth.

In the quarterly results, the company said the shaft advanced 875 ft (277 m) in the three months ending December 31, having now reached a depth of 4,240 ft. Kirkland Lake said the project, which will see the shaft sunk to a depth of 6,400 ft in one phase, was around one month ahead of schedule at the end of 2020. Project completion was targeted for late 2022.